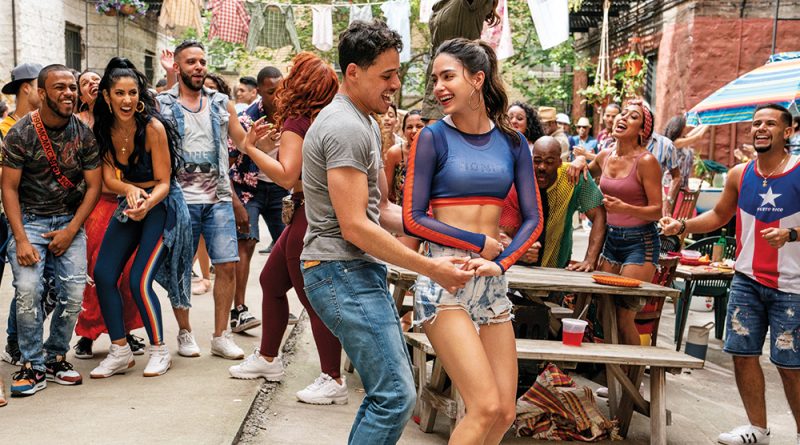 There’s something called ‘cave syndrome’, which is the fear of returning to normalcy after a year of pandemic isolation, even after vaccination. Now there’s a cure that should get lots of people back into theaters. It comes courtesy of director Jon M Chu and writers Lin-Manuel Miranda and Quiara Alegría Hudes, in the form of their visually extravagant, joy-filled new release, In the Heights. The film genuinely celebrates community, togetherness, and loyalty in a way that is a balm to those who desperately yearn for it. Let’s be honest. That is all of us.

Based on the multi-Tony winning play, In the Heights follows Washington Heights Bodega owner Usnavi (the magnetic and warm Anthony Ramos), who works long hours, saving every dime so he can build a better life for himself. The character is the narrator and center of the story, and Ramos is perfectly cast, as are so many other characters populating this story, which includes lots of folks in the community connected to Usnavi, who all have dreams of their own. The biggest standout is a member of Usnavi’s beloved chosen family, the neighborhood’s de facto Abuela, Claudia, played by Olga Merediz, who was nominated for a Tony when she originated the role on Broadway. Hopefully there’ll be talk of an Oscar nomination for her later this year.

It makes sense that Jon M Chu would helm this extravagant musical, given he is the creator of the award-winning TV series The Legion of Extraordinary Dancers, as well as the over-the-top confection and blockbuster Crazy Rich Asians. In the Heights once again shows he is capable of balancing scale without compromising story. Director of Photography Alice Brooks has been collaborating with Chu since they were both film students at USC. She declared filming in NYC and in Washington Heights, a community she says informed ‘every movement of the camera and every subtle lighting cue’, has been the highlight of her career.

The songs and dances in the film cover a lot of ground in terms of genre and style. Of course Hamilton lovers will appreciate the cadence in which much of the film is sung, at least interstitially, but there’s a great mix of hip-hop, Latin, pop, and musical theater, and the dancing is, in a word, spectacular. It is in the dancing that the anchor of joy reside, and it too is a blend of diverse influences and styles. The costumes spread bright bursts of color across the screen, as dancers sometimes take over entire street blocks. Knowing this was all filmed on location in and around New York City, that’s saying something!

Washington Heights is Lin-Manuel Miranda’s neighborhood, so it’s no surprise he and co-writer Quiara Alegría Hudes, capture the exuberance and complexity of the community there. He says it’s always been an immigrant neighborhood, but everyone can relate to the dream of wanting more. “Now it’s Latinx. When he was growing up in the 80s, it was Dominican. Before that it was Irish, Italian, and Jewish. It’s always the first chapter in so many stories, and that’s what makes it universal.” In the Heights really considers how people see home, what it means to them, and how sometimes that can shift in a beautiful way. He explains, “What does ‘home’ even mean? And every character in this film is answering it in a different way. For some, home is somewhere else, and for others home is the block that they’re on. That’s worth singing about, and worth celebrating in a movie of this size.”

A movie this size, populated almost exclusively with people of color, is so important to have as part of film history being made right now. It has been a long time coming, but look how gorgeous and filled with talent the film is. Look how much we’ve missed not having more films representing essential parts of American culture.

It’s such a pleasure to see pre-pandemic hugging, dancing, and celebration, knowing that as we transition beyond the nightmare of the last year and onto something better, we can imagine moments of celebration for ourselves and those we love (though likely on a much smaller scale, and without Broadway-level dancers taking part). In the Heights is universally aspirational in so many ways, but in particular it is inspiring for a country that has been through so much, and needs healing. It reminds us to turn our focus to better days and better times ahead.