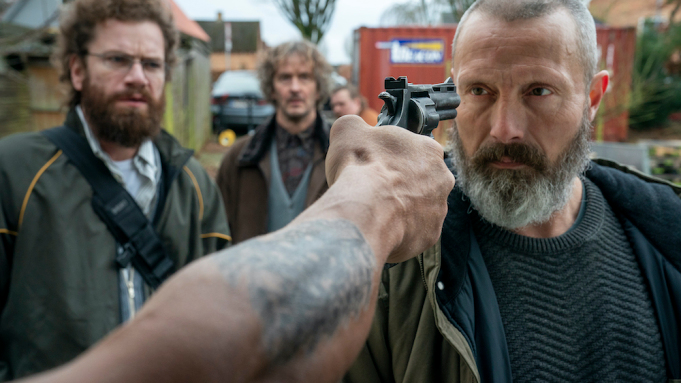 Riders of Justice is a wildly violent revenge tale set partly at Christmas, which may make it eligible to rival Die Hard for super bloody excellent holiday fare.

It has a lot of the same joyous spirit, too, as wholesale killing goes.

Under all the pitch-black laughs and violence is a frankly touching exploration of the need to make sense out of senseless tragedy.

Mads Mikkelsen stars in Riders of Justice as Markus, a professional soldier who returns home from Afghanistan to cope with the death of his wife.

He is the very definition of taciturn, a seemingly cold man of few words and fewer emotions. Markus has no idea how to comfort his teenage daughter Mathilde (Andrea Heick Gadeberg) in this time of grieving, and refuses every outside offer of spiritual, physical or psychological help.

Mathilde, meanwhile, puts post-it notes on her wall of the events leading up to the tragedy. Is it a chain of cause and effect? Why did this happen? What does it mean?

And what if it’s just random bad luck?

Into the lives of Markus and Mathilde comes Otto (Nikolaj Lie Kaas), an eyewitness to the recent family tragedy.

Otto is a computer nerd and his specialty is probability calculations. He has news for Markus — that ‘accident’ that killed Markus’ wife and decimated the family was a premeditated crime.

Also killed in the incident was a man who was about to testify against some hardened criminals.

Everything about the writing in Riders of Justice is delightful, but the genius of what writer/director Anders Thomas Jensen is doing here is most evident in the creation of this trio of deeply damaged, somewhat deranged and entirely sweet-natured men, each of them ruthless in his capacity to hack into the lives of others, misuse spyware and gather information on enemies real or imagined.

Given the Christmas theme, perhaps they are the three wise men.

Markus goes with this trio to test out their theory that his wife’s death was no accident.

Thereafter it becomes obvious the story is now a revenge thriller, but you may find yourself laughing at the bone crunching, chest-shattering, close-up-of-bullets-to-the-head type violence that follows. There’s a certain level of absurdity at all times.

There’s a lot going on around the edges in Riders of Justice; don’t be surprised if you want to watch it again immediately after first seeing it.

So much seems to hinge on whim, fate, chance, coincidence: a stolen bike, a social media post, a case of mistaken identity; is there any sort of order in the universe?

Various authorities — a priest, a madman, a mathematician, a nihilist — offer their take on what it all means. Or doesn’t mean.
Our group of misfits has to band together if they intend to fight back against the villains, but in the end it’s all about the banding together, and not so much about the bad guys.

Every single character is fully three dimensional and oddly charismatic. The filmmaker has a way of writing male characters that doesn’t even attempt to hide their vulnerability. It leads you to believe perhaps all is not lost.