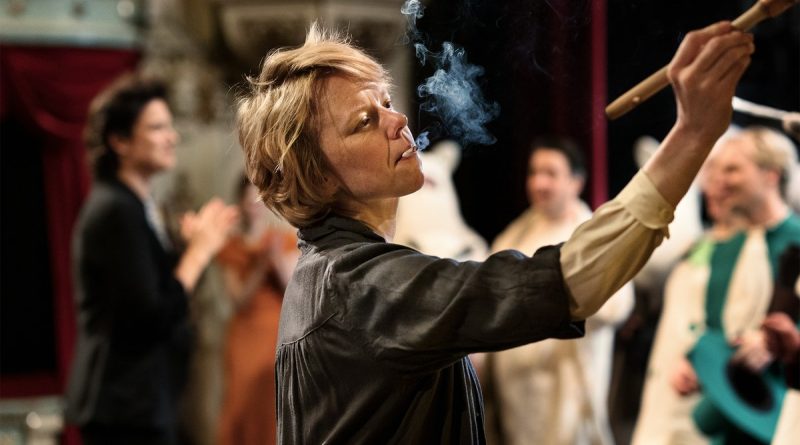 Set in the late 1940s and early ’50s, the film introduces viewers to Tove when she’s already a grown woman and an experienced artist. In a twist on stories in which rigid parents scoff at their children’s desire to paint, sculpt, or draw for a living, Tove’s father — a well-known artist himself — pooh-poohs her illustrations for not being artistic enough. He wants her to do “real” art — i.e. paint on canvas — and can’t see the merit in her little sketches of fanciful creatures.

But Tove finds comfort and escape in her forest full of trolls and witches, and she comes back to them again and again, especially when her life is complicated by romance. The movie follows two key relationships in Tove’s life: Her romance with married journalist/politician Atos Wirtanen (Shanti Roney) and her passion for socialite/theater director Vivica Bandler (Krista Kosonen). Fiercely protective of her autonomy, Tove discourages Atos’ inclinations toward domesticity but appreciates his role in her life — then, when she meets Vivica, they connect in a way she didn’t know was possible. (The chemistry between Pöysti and Kosonen is intense.)

As she works out who she wants to be — and who she wants to be with — Tove continues to develop the Moominland characters and stories that would ultimately make her famous. Pöysti plays her with empathy, strength, and understanding throughout; it’s a lovely, lived-in performance that Bergroth develops skilfully with her confident direction. Tove’s spirit and inner light may occasionally be dampened, but she’s never down for long, and she always comes up dancing. — Betsy Bozdech

Loren King What an enchanting introduction to the fascinating life and work of the unique Finnish painter, author and illustrator Tove Jansson. Finnish director Zaida Bergroth’s finely crafted, elegantly shot and richly designed film opens in mid-1940s Helsinki as Jansson (Alma Pöysti) struggles to establish herself as a painter, away from the shadows of her graphic-artist mother and sculptor father who dismisses his daughter’s habit of doodling cartoon figures and insists she create “real” art. But those dumpling-like figures became the Moomins, the subject of Jansson’s wildly successful children’s books that earned her worldwide fame. Besides a rich portrait of Jansson the artist, the film gives equal weight to her bohemian life. Tove has an affair with married socialist politician Atos Wirtanen (Shanti Roney) then becomes smitten with free spirit theater director Vivica Bandler (Krista Kosonen) who pushes Tove to write a Moomins musical. Tove is an irresistible depiction of an unconventional woman who can’t help but be true to her creative needs and the needs of her heart and Pöysti, who also played Tove on the stage, is captivating. Tying Tove’s rich and complex life together is the amazing actual footage that runs just before the credits of the real Janssen laughing and dancing with abandon. The clip shows how accurately Tove has captured its subject in all her dimensions.

Pam Grady: Alma Pöysti is simply magnificent as Tove Jansson, the Finnish artist, illustrator, and writer who became famous worldwide for the Moomins, the hippopotamus-like family of trolls that populated a series of books and a comic strip beginning in the 1940s. Zaida Bergroth’s biographical drama gives a full measure to Jansson’s life, exploring her difficult relationship with her judgmental sculptor father and her more supportive one with her artist mother, observing her creative struggles and eventual triumphs, and examining her relationships with the man and two women who were the loves of her life. Bergroth vividly portrays Finland of the postwar era and elicits strong supporting performances throughout. It is Pöysti, though, who lifts the film from the ordinary biopic with a vivacious, deeply felt turn as an inspiring and unconventional woman.

Leslie Combemale Anyone who knows the history of comic strip and illustration art knows the great and inventive Finnish artist Tove Jansson. She’s sort of like the female Dr Seuss. Her books have been translated into over 50 languages, and there’s Moominworld in Naantali Finland, a Moomin Museum based on her characters, and Moomin shops literally all over the world. Like many other illustrators, Tove didn’t believe her work was ‘real art’. That is one struggle examined in the film Tove, as well as Tove coming to terms with other aspects of her identity. Alma Pöysti is wonderful as the famed artist, capturing her dynamic but conflicted spirit well. It’s also great to see so female filmmakers in below the line collaboration with director Zaida Bergroth.

Nell Minow: It is heartening to see that writing books loved by children is beginning to be recognized as significant, meaningful, and a genuine artistic achievement in films like Little Women, Becoming Astrid, and now Tove, with a complex, layered performance by Alma Poysti.

Sherin Nicole During Tove my awareness of what I was supposed to feel outweighed any connection to the story of Tove Jansson, the creator or Moomins. There is a doleful air permeating every aspect of the film, from visuals to sentiment to sound, until even the droll moments are a momentary flicker. It is a story that steeps rather than boils, but perhaps for some it will make a satisfying, slowly sipped, cup of tea.

Susan Wloszczyna: Biopics are a dime a dozen these days with many often featuring the usual cliched rise- and-fall scenario. But with Tove, director Zaida Bergoth is lucky enough to focus on a uniquely alluring Finnish sketcher, painter and author best known for her Moomins, hippo-like creatures with puffy snouts that were featured in comic-strips and books. From the start, she was able to pick herself up and dust herself whenever the chips were down. That includes the opening scenes as she and her family head back to a rubble-filled Helsinki at the end of World War II. Read full review.

Marilyn Ferdinand Coming-of-age stories are normally thought of as involving teenagers who learn the realities of adult life. In fact, we all come of age again and again as we pass through new phases of our lives. The original coming-of-age tale director Zaida Bergroth tells in the biopic Tove involves Tove Jansson, a Finnish artist best known for her Moomin children’s books. Tove is 30 years old when the narrative begins in 1944. She is living at home, trying to emerge as a serious artist from the long shadow of her censorious father, sculptor Viktor Jansson. When she fails to win a grant to study abroad, she moves out and begins her journey to find herself, including discovering that she is a lesbian when she is seduced and falls deeply in love with an upper-class theatre director who encourages her artistic creativity. Alma Pöysti is brilliant as the high-spirited Tove, infusing a fairly conventional biopic with incredible energy and complexity. The supporting cast, particularly Krista Kosonen as Vivica Bandler, the object of Tove’s grand passion, as well as the cinematography, costumes, and art direction, build a sumptuous and fully fleshed world that is a pleasure to visit.

Jennifer Merin Finnish director Zaida Bergroth’s dramatic and compelling Tove tells of the life, loves and creative arc of Tove Jansson, the free-spirited and prolific author of the Moomins books and comic strips that are beloved by children of all ages everywhere in the wide world. Set in the late 1940s and early 1950s, the narrative aptly reflects Tove’s feminist battle for recognition of her work as a fine artist and her ongoing struggle against society’s repression of her chosen lifestyle. Alma Poysti’s turn as Tove captures all of the artist’s exuberance and angst and her captivating performance is supported by a superb ensemble.

Liz Whittemore Tove Jansson was the epitome of the bohemian spirit and creator of the Moomins books and comic strips. These characters were created out of love, wonder, and unadulterated passion. Motivated partly by the emotional betrayal of loved ones and a “watch me succeed” attitude, Tove Jansson should be considered a feminist icon of the 1940s and 50s. Alma Pöysti as Tove is breathtaking. The audience lives inside her nuanced performance. Tove brings extra magic to the arts by highlighting every visual form within one striking film. This is a story of a woman whose awoken sensuality and vibrant spirit would not be diminished.

Cate Marquis A charming Finnish film about an artist’s journey to finding herself. The artist is Tove Jansson, the creator of the Moomins children’s books, and director Zaida Bergroth’s mostly Swedish-language film follows the free-spirited Tove (played winningly by Alma Poysti) from her youth at the end of WWII into the 1950s. The daughter of a well-known sculptor, a demanding man who pushes her as a painter, Tove struggles for recognition with her paintings, while finding escape and relaxation in private by cartooning a fantasy world of creatures called Moomins. This delightful biopic follows Tove’s life and career through ups and downs, and her romances with both men and women, on her journey to her true self. Backed by a fabulous ’40s soundtrack, Tove, Finland’s official Oscar entry, captures the drama and charm of Tove Jansson, who captures our hearts.