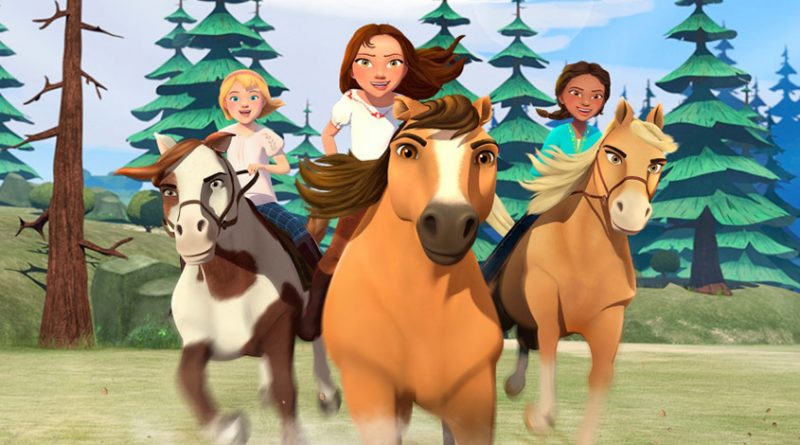 Long in the making, Dreamworks is finally releasing Spirit Untamed, the next chapter in the Spirit franchise which started with 2002’s Oscar-nominated film Spirit: Stallion of the Cimarron, and grew to include the Netflix Emmy-winning series Spirit Riding Free. The new animated feature is directed by female filmmaker Elaine Bogan, known for her work on Trollhunters, and was Dreamworks Television’s first female director on Dragons: Riders of Berk. The world of Spirit is very much centered on adventures for girls, and is one that offers an opportunity for young female audiences to celebrate friendship and the powerful connection between girls and horses. Spirit Untamed taps into all those elements, and the film will feel fun, while bringing positive messages of girl power and bravery parents will appreciate.

Spirit Untamed focuses on Lucky Prescott (Isabela Merced), who lost her mother Milagro Nararro (Eiza González) when she was too young to truly remember her. Milagro was a stunt horsewoman who died in an accident while performing in her small town Miradero. Lucky has been raised in the city by her Aunt Cora (Julianne Moore) but after headstrong Lucky destroys the setting of her grandfather’s election event, Cora boards a train with Lucky to Miradero, bringing her to stay with her estranged father Jim (Jake Gyllenhaal), who would rather his daughter do anything but risk her life riding horses. Lucky feels entirely out of place until she meets talented and experienced local riders her own age, Abigail (McKenna Grace) and Pru (Marsai Martin). Her special new bond with wild stallion Spirit calls her to step in when nefarious horse wrangler Hendricks (Walton Goggins) captures the strong-willed horse and his herd, and plans to sell them into a life of labor. New trio of friends Lucky, Abigail, and Pru, determined to stop Hendricks, embark on an adventure filled with danger and excitement, driven by the equine love they share.

Among several delightful elements Spirit Untamed brings to the screen is an unspoken diversity that includes a girl of Mexican-American descent with Lucky, a new bestie, Pru, who is Black, and whose father Al Granger (Emmy winner Andre Braugher) is best friends with Lucky’s dad Jim. Though the era the film is set in is unclear, based on some of the costumes, it must be the late 1800s. As such, it reveals a largely untold aspect of the Wild West in which Black and Hispanic cowboys and frontier people were strongly present, and embodied as much the spirit of the American West as the white people almost exclusively represented in history books.

Director Bogan grew up around horses as a child, and when she moved to LA to work in the DreamWorks story training program after college, she discovered the Los Angeles Equestrian Center. She says it became her second home. Her love of horses was well known inside the studio, and having risen to director through DreamWorks Television, she became the perfect person to helm Spirit Untamed. Her experience with story shows in the final product, as does her knowledge of equine anatomy, but of course creating an animated feature is a highly collaborative endeavor. Knowing there was a tight schedule for release, Bogan enlisted Ennio Torresan Jr as co-director, and his different perspective, one that didn’t know horses inside and out, was helpful in allowing a wider creativity to reign. She said, “I was conscious not to think with the mindset of, ‘Oh, a horse would never do that.’ I didn’t want that voice to take over what was meant to be an entertaining, fun, inventive and creative project. He was the non-horse voice to bring that creativity and invention into the horse world, which helped me to not get locked into that voice in my head.” Torressan did have a daughter who had watched the entire Spirit Riding Free series multiple times, so he brought a fresh perspective specific to having seen the animation, rather than horses in real life. The whole story team did, however, take a field trip to the Los Angeles Equestrian Center to study the demeanor and body language of horses so they could portray them accurately. They also used Bogan’s horse Ziggy Stardust as inspiration for one of the horses in Spirit’s herd.

The only downside to the film is the fact that Lucky, Pru, and Abigail make some choices that border on recklessness, and there are several times that one or all of them defy their parents. Parents of young viewers may find that of concern. Still, it’s a joy to see relationships examined, both between young girls and between the girls and the horses in their care. Spirit Untamed will find a ready audience in the many fans of the Spirit franchise, and may make a few new fans with this horsey friendship-based tale.