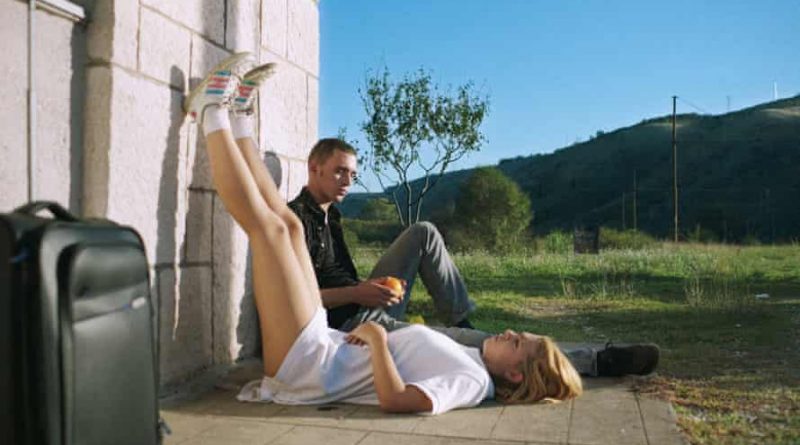 For everyone who has experienced one of those days or weeks when nothing goes right, Take Me Somewhere Nice will strike a familiar chord. The story begins with Alma, in her Netherlands home, as she learns that her estranged father is in the hospital in Bosnia, his homeland. She flies there, expecting her cousin Emir’s assistance to find him.

The search foregrounds the tension embedded in the triangular relationship of Alma, Emir, and his friend Denis who travels with them. A road movie unfolds through a series of unfortunate events. In her debut film, Amsterdam based writer/director Ena Sendijarevic has a strong command of mood and actors, with Sara Luna Zoric an unselfconscious teenager in this, her first role. Convincing even in several telephone conversations with her mother that present only her side of the exchanges, Zoric conveys a relaxed and yet also lost quality.

In a director’s statement, Sendijarevic writes of the difficulty of harmonizing the contradictions of the two worlds Alma inhabits emotionally and physically. It succeeds due to the deep understanding of, as the director says, her own status as a former refugee in what she calls “ultimately a story about migrants.” Alma’s loneliness motivates her actions and reactions as Sendijarevic toys with “stereotypical portrayals of migrants, womanhood, [and] the Balkans,” denying or inverting expectations.

Translating her desire to “create an alienating world” into images, Sendijarevic relies on compositions with emptiness often dominating the top quarter to half of the frame. This and the mirror images in the opening shots convey the film’s themes of the divided self and the absence of focus, interest, or insight. The film does fail on several counts in addition to the listless mood. First, though Alma explores her newfound sexuality, the camera unnecessarily fetishizes her body throughout the film, putting her in a low-cut, short dress in early scenes and later in an extremely short t-shirt. It also includes an unpleasant, unnecessary scene with a dog hit by a car.

It does offer time to contemplate its philosophical weight in this fairly quiet, character-driven story, one that offhandedly makes political statements as well. In Bosnian and Dutch with English subtitles, Take Me Somewhere Nice is available through Dekanalog films.