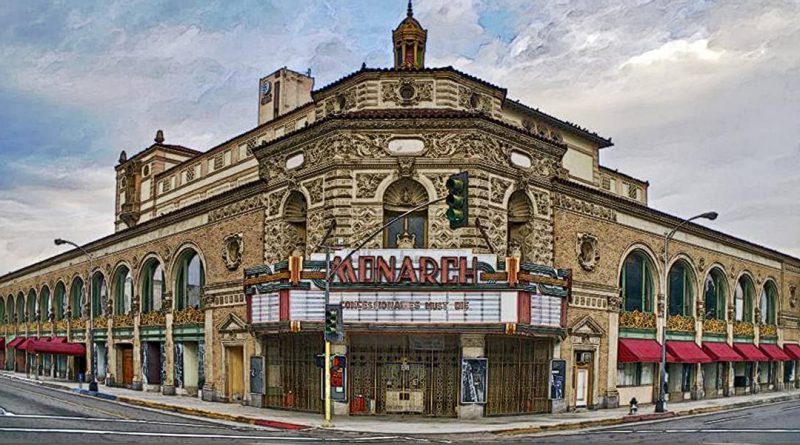 A few week before my college graduation, I saw the 1976 (alleged) comedy Won Ton Ton, the Dog Who Saved Hollywood.

I remember virtually nothing about it — except how unfunny it turned out to be.

But I’ll never forget where I saw it: Chicago’s Granada Theatre, a cavernous, splendiferous movie palace of Moorish delights that is, alas, no more.

I’ve been recalling the Granada — and all the other magical movie meccas of my youth — since viewing The Concessionaires Must Die!

An affectionate salute to lovers of movies, comic books, TV and other pop-culture magnets, Concessionaires centers on the do-or-die struggle of the Monarch — a venerable single-screen movie theater that features vintage cinematic favorites — to survive the imminent arrival of a spanking new multiplex nearby. (Irony rears its ugly head, considering that those who see Concessionaires will no doubt stream it.)

The title concessionaires — most of them, anyway — are desperate to keep the Monarch afloat. Especially our hero Scott Frakes (the adorkable David Blue), who’s been working there since his teen years — and is now pushing 30.

One of those uber-geeks whose real life is devoted to make-believe, Scott may be the most dedicated concessionaire, but he’s hardly the only one who assembles to save the Monarch.

Only owner Gabby (Zakareth Ruben), who inherited the theater from her parents, seems open to life without the Monarch. Especially when villainous multiplex scion Derek Fisk (relentlessly overwrought David A. Cooper) makes Gabby an offer she can’t refuse — or can she?

Virtually nothing that happens in The Concessionaires Must Die! qualifies as anything but predictable. Yet that’s the point, as writer-director America Young and fellow scribes Sam McCoy, Keating, Ruben and April Wade transplant their characters into cinematic realms from Casablanca to Clerks, Star Wars to Shaft.

Ultimately, however, The Concessionaires Must Die! overstays its welcome, leaving this movie lover feeling like a party guest cornered by an over-enthusiastic drunk who’s determined to recite every bad joke (and they’re all bad) from Won Ton Ton, the Dog Who Saved Hollywood.