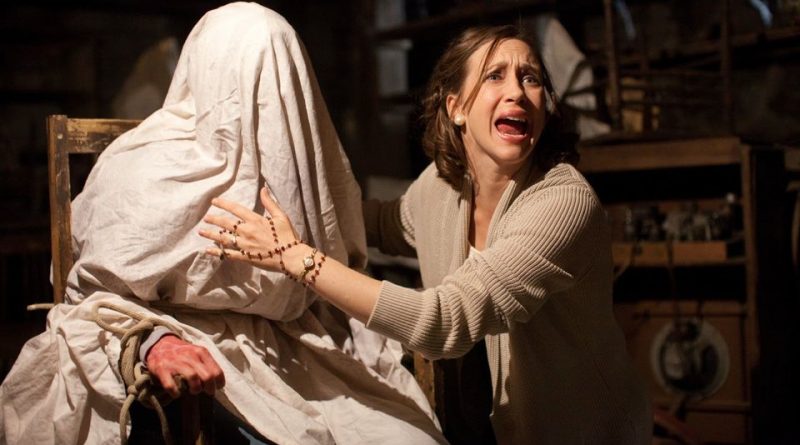 Back when I was anchoring the news on WTNH in New Haven, CT, I had the opportunity not only to ‘ghost-hunt’ with the late Lorraine and Ed Warren but also to visit their ‘haunted house’ at 966 Lindley Street in Bridgeport.

Known as paranormal investigators, the deeply spiritual Warrens received a lot of attention from the American Society of Psychical Research and the Psychical Research Foundation – in addition to spawning the Conjuring cinematic universe, including three Annabelle films and other spin-offs.

This installment is based on the curious case of tormented Arne Cheyenne Johnson, whose solemn answer when accused of the 1981 slaying of his Brookfield landlord was that the Devil made him do it.

“That kid is either gonna live or die, depending on what you find,” Arne’s lawyer (Ashley LeConte Campbell) tells them.

As devout Roman Catholics, it’s not surprising that they firmly believe “A master Satanist is not an adversary taken lightly,” having discovered a malevolent, macabre Witch’s Totem in a crawl space beneath the Glatzel home.

That leads the Warrens to Kastner (John Noble), a retired priest known for his occult research, and a demonic presence known as The Occulist (Eugenie Bondurant) in a creepy morgue.

As always, the wonderful rapport between Vera Farmiga and Patrick Wilson contributes to the ambiance.

Written by David Leslie Johnson-McGoldrick (The Conjuring 2) from a story by James Wan, it’s directed by Michael Chaves (The Curse of La Llorona), taking over from previous helmer Wan, continuing the characters originally created by Chad Hayes & Carey W. Hayes.

On the Granger Gauge of 1 to 10, The Conjuring 3: The Devil Made Me Do It is a spooky, supernatural 6, simultaneously opening in theaters and streaming on HBO Max.