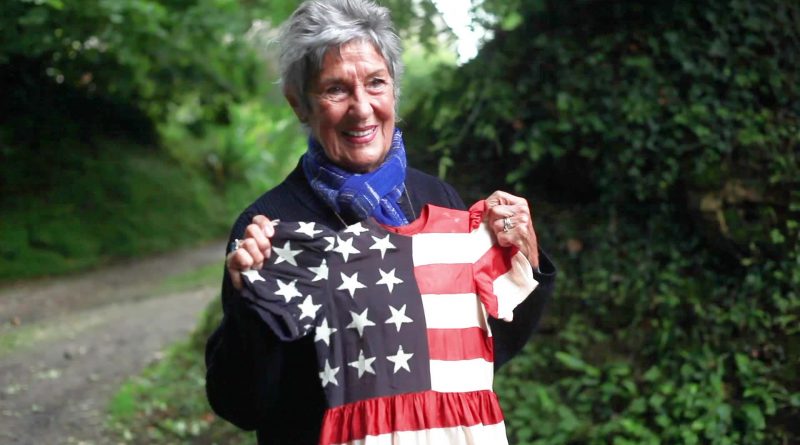 On June 6, 1944, Allied troops landed on the beaches of Normandy to take back the region occupied by the Axis powers. Many, many works have described D-Day. The documentary, The Girl Who Wore Freedom, differs because it tells the story from the points of view of the citizens of Normandy.

The title refers to an American flag dress worn by a little girl, Daniele “Dany” Patrix Boucherie, of Ste.-Marie-du-Mont. She still has the star-spangled dress, and she also has memories of the days of liberation. She remembers seeing planes with gliders and the parachuted paratroopers landing.

Like her, citizens in the film speak for themselves. They remember being cared for by some of the 800,000 American soldiers stationed during those days, young men who fed them Life Savers and chocolate. Their stories, told as adults, are accompanied by vintage photos of young American soldiers bottle-feeding orphaned babies. Madam Renaud remembers when Gen. Theodore Roosevelt Jr. died in a field.

Descendants tell their families’ stories, such as a man whose uncle had to bury 40 soldiers. They still ask why an 18-year-old boy would travel from America to France for this battle? Chloe Gavin speaks of her father, the intrepid, debonair Gen. James Gavin, commander of the 82nd Airborne Division, and Helen Patton, daughter of George Patton, the head of the 3rd Army, speaks of her father, too.

Florent Plana, a filmmaker wearing a Jefferson Barracks t-shirt, had recorded the memories of 500 veterans from those days, bringing their experiences to life.

The documentary begins weakly, but it gathers steam very soon. It is poignant: women weed graves; another writes a grieving mother and includes a blade of grass from the mourning mother’s son’s grave. A veteran of the landing feared returning to St. Lo, where he had dropped bombs on the civilians.

The director and narrator, Christian Taylor, gathers all these stories into a moving picture of history — not of the head muckety-mucks but of the women and children. The Girl Who Wore Freedom adds heart to the lore of that great martial endeavor known as D-Day.