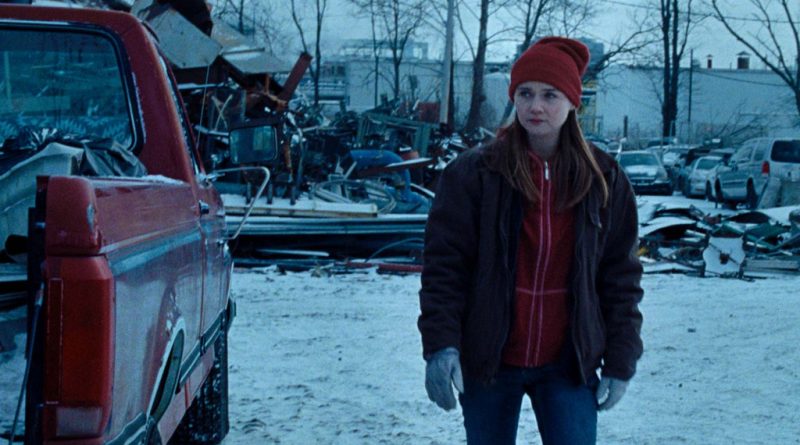 The American Dream feels almost as far out of reach as the moon in Nicole Riegel’s compelling feature debut, Holler, which follows an enterprising teenager named Ruth (Jessica Barden) who would do just about anything to escape her inevitably bleak future in a dying Southern Ohio town. She’s smart, and college could be her ticket out, but paying for it means taking dangerous chances with a not-exactly-legal scrap-metal scavenging crew. Ruth and her brother, Blaze (Gus Halper), are used to fending for themselves. Their mom, Rhonda (Pamela Adlon), who’s currently incarcerated, has been hooked on pills ever since she suffered a workplace injury and a doctor prescribed painkillers … and then kept refilling the prescription. But with factories closing and no new job opportunities on the horizon, Ruth and Blaze are running out of money — and options. They start working with Hark (Austin Amelio), sneaking into abandoned manufacturing facilities at night and stripping out any saleable metal they can find.

The work is lucrative but very risky, and Blaze is eager for Ruth to leave it behind as quickly as she can and put her smarts to better use getting a degree. Never mind that both Rhonda and the high school guidance counselor are extremely skeptical of the idea (“we aren’t college people,” Rhonda tells her daughter). Blaze believes Ruth has what it takes to make it to a bigger and better life, and gradually she starts to think he might be right.

In a memorable performance with echoes of Jennifer Lawrence in Winter’s Bone and Thomasin McKenzie in Leave No Trace</em> — plus a dash of Julia Garner’s own canny Ruth from Ozark — Barden holds viewers’ attention whenever she’s on screen. And Riegel’s script does an excellent job of supporting Ruth’s ambitions while simultaneously building empathy for the people she’ll be walking away from. Aspiring to steady work and a stable life is nothing to be ashamed of, Holler shows us, and the fact that those hopes have been torn from so many Americans by economic shifts and political powermongering is a tragedy. — Betsy Bozdech

Pam Grady: Jessica Barden delivers a nuanced, star-making performance as Ruth, a teenager scrabbling to survive in rust-belt Ohio, who finds herself at a crossroads. She can stay home, where opportunities have dwindled to crewing with her older brother Blaze (Guy Halper) on a gang that steals scrap metal, or she can leave everything she knows behind, go to college and create a brighter future. First-time feature writer/director Nicole Riegel evocatively depicts the hopeless mire that will swallow Ruth whole if she stays while also limning the reasons she would stay: It may be a dead-end existence, but it is what she knows and it is where Blaze is. Shot in 16mm, the drama paints a gritty portrait of a life on the brink, given emotional urgency by Barden’s arresting turn.

Leslie Combemale Writer/director Nicole Riegel knows a thing or two about the disintegration of working class industrial towns. Her film Holler is based in Jackson, Ohio, where jobs are disappearing, drug use is rampant, and getting out can seem impossible to anyone raised there. That’s true for the protagonist of her film, Ruth, who has brains no one cares about putting to use, and has dreams of a better future. Holler is like a cinematic scream of despair. The characters that populate the story span the spectrum from dogged optimism to complete hopelessness, and the actors embody those perspectives perfectly. The entire experience points to Riegel as a filmmaker to watch, especially for no-holds-barred honesty, whether the picture it forms is positive or painfully bleak.

Loren King I was completely taken in and moved by writer-director Nicole Riegel’s raw, honest debut which showcases the hardscrabble working class life of a young woman, Ruth, brilliantly played by British actor Jessica Barden. Like “Frozen River” and “Winter’s Bone,” which both owe a debt to Barbara Loden’s great, prescient “Wanda,” “Holler” belongs to a tradition of splintery, scrappy films about small town life rarely depicted on screen. Ruth’s options in her dead end Ohio hometown are close to zero: her mother (Pamela Adlon, excellent) got hooked on painkillers after injuring her hand and is now trying to detox in prison. Her brother steals metal and sells it for scrap, which for Ruth starts to look like a viable income resource. Riegel’s immersive, documentary style approach to her story of dead ends and the desire to escape them is an effective, powerful mix of dread and longing, realism and hope.

Nell Minow: Jessica Barden gives a performance of great sensitivity and subtlety in Holler, an evocative depiction of the Sisyphus-like experience of poverty in a depressed economy.

Susan Wloszczyna: Holler is a portrait of a community with diminishing opportunities for its citizenry. But, what sets this coming-of-age tale apart isn’t that it takes place in a dreary, down-beaten town in Southern Ohio. Instead, it’s the central character of Ruth, a whip-smart high-school senior who has managed to be accepted to a college. The feature directorial debut of writer and helmer Nicole Riegel acknowledges the hollow promises spouted by politicians who like to curry favor with blue-collar workers but do little to improve their lots. I was happy to see a clip of Donald Trump, as he talks of providing “jobs, jobs, jobs,” while billowing smokestacks continue to vanish in the country. Read full review.

Jennifer Merin Holler, writer/director Nicole Riegel’s dramatic first feature, is about Ruth (Jessica Barden), a bright teenager who’s trying to escape her hard luck circumstances by going to college so she can have a better life. When the factory where she has a low-paying job closes down, she joins a gang that pilfers metal pipes from abandoned buildings to sell as scrap — an ‘occupation’ that’s physically hazardous, against the law, and oft challenged by brutal rivals. Seeing how this tenacious girl uses her smarts to transcend her circumstances is gripping — and inspirational.

Sandie Angulo Chen: Writer-director Nicole Riegel’s feature debut Holler is reminiscent of Debra Granik’s work, particularly Winter’s Bone and Leave No Trace — movies that explore young women surviving life on the fringes of American society. Here, British actor Jessica Barden stands out with her performance (just as Jennifer Lawrence and Thomasin McKenzie did in Granik’s films) as Ruth, an intelligent high-school senior whose only hope of “getting out” involves joining a dangerous scrap-metal crew and hoping to scrape together the funds to pay for college. The film, which Riegel has said is semi-autobiographical, explores a lot of issues, including how opioid addiction and loss of work has decimated old factory towns in the Rust Belt, but it also evokes a hopefulness that keeps it from being exploitative.

Liz Whittemore Ruth is industrious, smart, tenacious, and trapped by socioeconomic circumstances and a small town’s low expectations. She must decide between mediocrity and a brighter future. Holler is about financial and emotional survival. It’s about shifting power dynamics when every existing prospect seems bleak or out of reach. The score is spot on. It creates moments of unease and energy that continually fit Ruth’s plight. I would have loved to see more than the two songs chosen for the soundtrack. These moments are hugely impactful. The entire tone of Holler hums when they play. Jessica Barden as Ruth is refreshing and grounded. You cannot help but root for her. She represents so many people lost in a broken economic system. Stuck in a place where shut down factories and opioids keep the population desperate, only the strong survive. Ruth is a survivor.