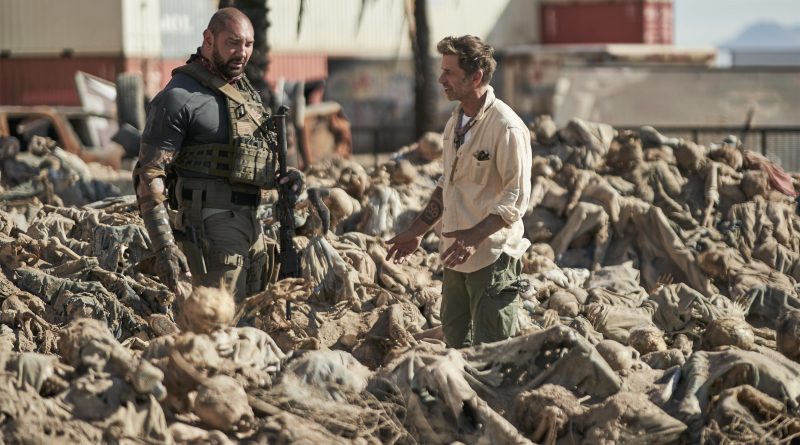 The opening sequence of Zack Snyder’s Army of the Dead reveals how ‘patient zero,’ the result of military experimentation, escaped outside of Las Vegas.

Now, the glittering gambling city has been beset by carnage.

Although he received the Presidential Medal of Freedom for saving the U.S. Defense secretary during a zombie outbreak, Scott Ward (Dave Bautista) is stuck flipping burgers in a diner.

So he jumps at the chance when a casino boss (Hiroyuki Sanada) offers him a mission to retrieve $200 million from the vault of a Las Vegas casino by crossing into a walled-off Quarantine Zone in the middle of this undead apocalypse – and the clock is ticking since the U.S. government is prepared to drop a nuke to obliterate the infestation on July 4th.Among others, Ward is accompanied by his estranged daughter (Ella Purnell), a mechanic (Ana de la Reguera), a German safecracker (Matthias Schweighofer) and a tough helicopter pilot (Tig Notaro).

FYI: Long after original filming was completed, comedian Tig Notaro was swapped into the part when fellow comedian Chris D’Elia was dropped when sexual misconduct accusations surfaced. During post-production, Snyder digitally erased D’Elia and reshot entire scenes with Notaro.(It’s not the first time an actor was replaced during post-production. Remember when Kevin Spacey was cut from All the Money in the World and Christopher Plummer replaced him?)

FYI: The origins of Snyder’s concept dates back to White Zombie (1932), starring Bela Lugosi, based on William Seabrook’s The Magic Island (`1929) about a woman who travels to Haiti and falls under the spell of a voodoo master.

On the Granger Gauge of 1 to 10, Army of the Dead is an absurdly grim, splatter-soaked, escapist 6, available in theaters and on Netflix.