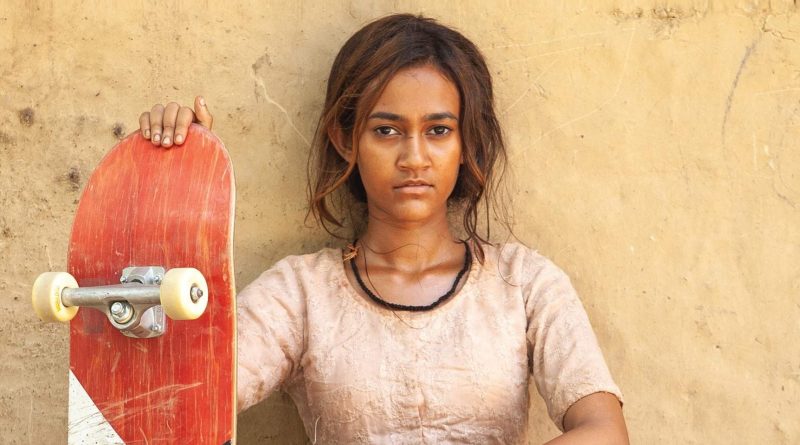 The idea that one small step can change a person’s life anchors the warmhearted Skater Girl, which tackles a lot of issues beyond a teenage girl in rural India who finds freedom on wheels.

Expectations around gender and caste are but two of the conflicts that director Manjari Makijany, making her feature debut, packs into the film. Streaming this month on Netflix, Skater Girl feels overstuffed at times with various plot threads and skateboarding montages. Yet there’s enough depth here that its uplifting moments have the thrill of watching a skater catch air.

Prerna (newcomer Rachel Saanchita Gupta), about 14 or 15, doesn’t realize that the “bearing board” that she uses to tug her younger brother, Ankush, to school each day resembles a skateboard without the front wheels. While he learns, she totes the wooden contraption home to do laundry and sell peanuts in the marketplace.

One day, her path crosses with Jessica (Amrit “Amy” Maghera, Hollyoaks), an advertising exec from London staying in their Rajasthan village. The shy Prerna marvels at this unmarried woman in her thirties who paid 20 Rupees for bottled water.

Jessica marvels too at this girl who confides she’s stopped attending school because she outgrew her uniform. So Jessica buys her another.

After Jessica takes video for social media of Prerna and Ankush riding around on the board, her American friend Erick (Jonathan Readwin, Stoner Express), who teaches nearby, drops by with his skateboard. The village children clamor to use it, and he’s soon teaching Prerna, Ankush, and their friends how to balance and roll.

Makijany, who co-wrote the script with her sister and producer Vinati Makijany, immerses us so well in Prerna’s life that viewers might wish the story had given her more attention. The sisters are filming a documentary, Skate Basti, about how skateboarding empowered a desert village in Rajasthan, and they clearly have affection for the area and girls like Prerna. But in Skater Girl, they also have a lot that they want to say.

Nevertheless, Gupta makes for a magnetic lead, showing every bit of pride and exhilaration on Prerna’s face as she learns how to ride and her crushing disappointment with parents who don’t understand. Her hardworking father thinks she’s old enough to marry, scolds her for playing with “things meant for boys,” and tells her to cook lentils instead. These and other moments have the compelling culture clash of 2002’s Bend It Like Beckham, about a soccer-loving Indian girl living in London, but without that film’s lighthearted humor, save for Shafin Patel as Ankush. He’s the plucky and supportive younger brother that many girls would love to have on their side.

Most of the film’s lighter touch comes through Erick and Jessica, who arrived in the village to see where her late father lived as a boy. Watching the kids enthralled by Erick’s board, she buys all of them skateboards (and later, thankfully, protective gear). The elders don’t like this outsider bringing in such Western things, but the undaunted Jessica decides to build the children a skatepark as well. Fortunately, she receives the blessing of the Maharani (Bollywood veteran Waheeda Rehman), who in a few brief scenes conveys the wistfulness of choices untaken and the desire to give other girls a better chance.

The fictional story overlaps with real life, as Skater Girl’s production notes explain how the filmmakers, with help from the skating community, built the Desert Dolphin Skatepark in Rajasthan, a free public park that still hosts training workshops and competitions today. Whether Prerna will compete in the one at the film’s climax isn’t ever in doubt, but Skater Girl has a few surprises on its way there. The ending leaves some plot threads hanging, but thanks to Gupta, it sticks the emotional landing.