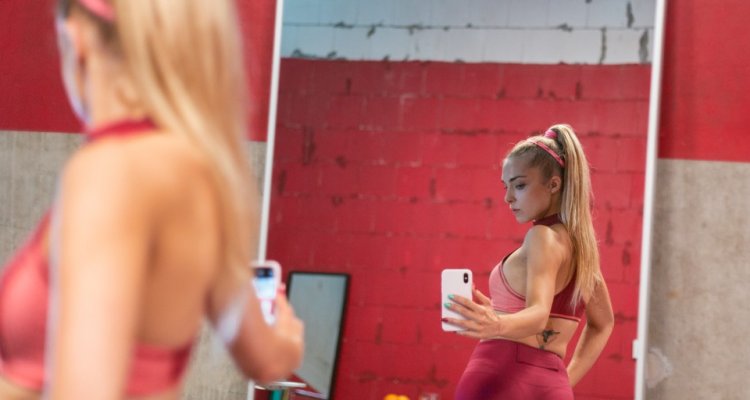 Sylwia’s look is one her 600,000 avid social media followers want, despite her frequent exhortations to “work with the body you have, not the one you want to have.”

Decked out in bright bubblegum pink, her blonde ponytail bouncing as energetically as her lithe legs and toned arms, Sylwia (Magdalena Kolesnik) shimmers in the spotlight, radiating energy to and affection for the legions she calls “my loves.”

But it’s when Sweat looks beneath the shiny-happy sheen of Sylwia’s Instagram-programmed existence that things get interesting.

Swedish writer-director Magnus Von Horn’s second feature (following 2015’s The Here After), an official selection at 2020’s virtual Cannes Film Festival, explores three days in the life of a character who knows exactly what, and who, she’s selling.

Schlepping overflowing swag bags upstairs to her Warsaw apartment? “Take the stairs, no matter how many bags you’re carrying!” Hungry for a snack? Try a smoothie made with “my beloved whey protein from Olympus Nutrition.”

But Olympus Nutrition isn’t too happy with Sylwia. After all, she betrayed her upbeat-all-the-time image by making a wee-small-hours Instagram confession (which, naturally, went viral) that she’d like to have “someone special in my life.”

That is, someone other than the stalker who parks beneath her apartment and posts videos on her Instagram feed more anguished than her own.

Even when Sylwia attends her mother’s birthday party, she finds it difficult to cede the spotlight to the guest of honor (Aleksandra Konieczna), or to get into the comfortably jolly spirit of the occasion.

Sweat works the contrast between Sylwia’s online and off-camera realities as Von Horn piles on deftly observed details — with more than a little help from Michael Dymek’s kinetic camerawork.

And, in an impressive feature debut, Kolesnik captures Sylwia’s determination to sell the hell out of her product — herself — despite the inescapable doubt that what’s she’s selling isn’t really who she is.

If only it looked a little deeper. But perhaps it’s tougher to see when sweat gets in your eyes.