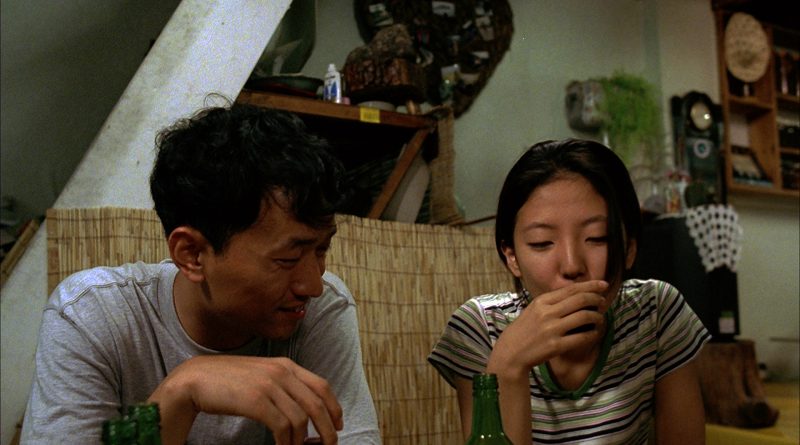 South Korean writer/director Hong Sang-soo observes individuals, casually but meaningfully, as they reveal themselves in so many informal, quiet moments. He again demonstrates his insightful perception in his 1998 film, The Power of Kangwon Province, only recently available in the U.S. The overlapping stories run in sequence rather than the usual cross-cutting juxtaposition of two intersecting narratives.

In this, his second production, as usual with Hong, events unfold without dramatic intensity as the first half of the film follows twenty-two-year-old Jisook and her two girlfriends, Misun and Eunkyoung, vacationing in South Korea’s Kangwon Province, a beautiful, mountainous, forested area northeast of Seoul. Jisook has ended an affair with a married man and says she’s making sacrifices for her dream. A local, off duty policeman wanders around with them, drinking too much, which leads to Jisook and friends critiquing each other, as only those who are close can, with the targets defensive and then apologetic. Friction is negligible and yet each exchange probes the heart of their loneliness, immaturity, and alienation.

The second part of the film profiles Jisook’s ex-lover, Sangkwon, also visiting the area. There’s a tantalizing expectation that Sangkwon’s and Jisook’s paths might cross. Meantime, Sangkwon and his male friend Jaewan visit a nearby temple, eat several times, also drink too much, and drop in at a local bar with young girls on offer. No one, male or female, appears happy, engaged, or satisfied emotionally or physically.

I would normally state there are no spoilers here, but all interactions meander so obliquely that there are few details that would divulge essentials. In fact, more often than not, the characters unhurriedly eat and drink as they converse. Rather than offering explicit revelations, important details emerge implicitly through offhanded comments and subdued reactions.

Stylistically, Hong prefers to keep his camera stationary, shooting in medium long shot to capture uninterrupted dialogue. To grasp his astute probing of our current ennui, viewers must relax, watch and listen, soon recognizing Hong’s impressive understanding of real people, including ourselves. In Korean with English subtitles, The Power of Kangwon Province is available through Grasshopper Films.