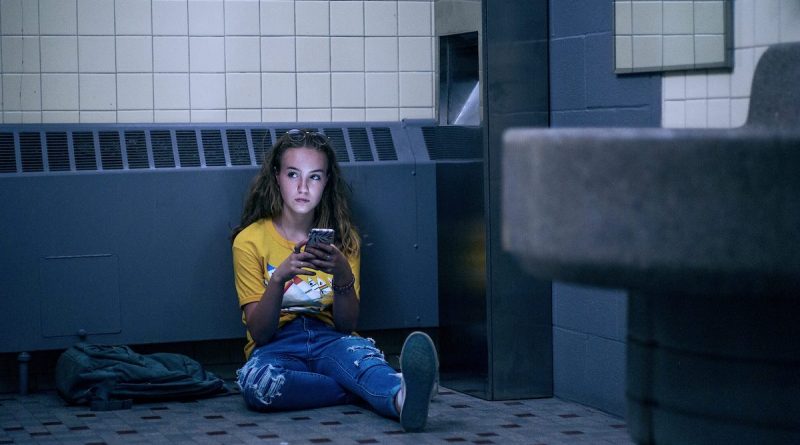 Emilie Bierre delivers a gripping performance as 13-year-old Magalie in Quebecois writer/director Jeanne Leblanc’s wrenching French-language drama Les Notres. Unexpectedly pregnant and left feeling adrift and out of control as her life constricts around her, Magalie is a child who’s forced to make adult decisions after a trusted family friend takes advantage of her vulnerability and — literally — abuses that trust. But, as she learns, those decisions also have consequences. The small town of Sainte-Adeline has been recovering slowly but steadily for the last five years from a factory disaster that killed several beloved members of the community, including Magalie’s father. Since then, her mother, Isabelle (Marianne Farley), has come to rely on the support of neighbor/town mayor Jean-Marc (Paul Doucet) as she raises Magalie and her brother as a single mom. Isabelle — and everyone else in town — is thunderstruck when Magalie has a blood test after fainting in dance class and it’s revealed that the young teen is nearly 20 weeks pregnant.

Magalie initially refuses to say who her baby’s father is, retreating into herself to escape the scandal that her pregnancy has caused. Classmates call her terrible names, and she’s bullied mercilessly in school and on social media. When she betrays her closest friend in an effort to protect the abuser who manipulated her, the consequences are more painful than she imagined. Throughout it all, Bierre is captivating, saying volumes with Magalie’s tiny shrugs and terse responses.

Leblanc deftly captures the insidious nature of grooming in Les Notres, telling a story that could give any loving parent or caregiver nightmares. No one wants to believe that their child could end up in Magalie’s situation — cruelly exploited by one of the very people they should be able to trust the most. But her struggle to find her way forward in a world that has revealed its harshness certainly makes for compelling cinema. — Betsy Bozdech

Marilyn Ferdinand The painful reality of child sexual abuse has finally emerged into wider public consciousness as more artists explore the experiences of victims and perpetrators, particularly in film. Director Jeanne Leblanc’s masterful feature, Les Nôtres, tells its story of 13-year-old Magalie (Émilie Bierre), who has been abused and made pregnant by a middle-age man (Paul Doucet) trusted by her widowed mother and the small Québec town that elected him mayor. What sets this film apart from others is its unwillingness to clean up the mess with inevitable discovery and satisfying justice. Instead, Leblanc gives us an in-depth look at the repercussions of this abuse not only on Magalie, but also on those in her circle. Suspicion, lies, the uncaring bullying of Magalie’s classmates, and the willful blindness and cruelty of someone who could have brought the crime to light further shred Magalie’s innocence. The cast is uniformly terrific, but especially Bierre, who digs deep to reveal the complex emotions of a confused, damaged teenager and foreshadow the troubled future of such children that should concern us all.

Loren King Among several recent standout films such as Groomed and Slalom that are about the sexual manipulation and abuse of young girls, director Jeanne Leblanc’s Les Notres (Our Own) distinguishes itself for its seeming “normal” depiction of small town life until it gradually turns dark and uncomfortable. Read full review.

Sherin Nicole A roiling nest of unsound people and reprehensible acts hidden beneath a veneer of average suburbia. Here innocence is stolen by the abuses of men in power and the innocent pay the price and sometimes, in the midst of their pain, pay it forward. This is a slowly seething film that causes your hands to clench.

Pam Grady: Only 13, Magalie (Emilie Bierre) is forced by circumstances into making decisions beyond her level of maturity when she becomes pregnant. Whether or not to name the father is first and foremost among them in a small Quebecois town where she quickly becomes the object of gossip and cyberbullying. Jeanne Leblanc’s impressive sophomore feature touches on a (very) young woman’s bodily autonomy, pedophilia, grooming, rape, and family dysfunction. From her first frames, she sets up the dynamics in a town where authority figures go unquestioned and anything out of the norm is noted by always prying eyes, and also at Magalie’s home where her widowed mother, overwhelmed and distracted, has lost connection with her daughter. Often the drama simply observes Magalie as Bierre delivers a dazzling performance as she inhabits the many aspects of this vulnerable, stubborn, troubled, often opaque, and not always likeable adolescent.

Sandie Angulo Chen: Canadian writer-director Jeanne Leblanc’s family drama centers on 13-year-old Magalie (Émilie Bierre), whose unexpected pregnancy throws her small Quebec town into a state of constant gossip. Everyone is quick to assign blame to Magalie’s best friend and neighbor Manuel (Léon Diconca Pelletier), who happens to be the Mexican-born teen foster child to the town’s beloved mayor Jean-Marc (Paul Doucet) and his wife Chantal (Judith Baribeau). It becomes clear many people would rather believe a tidy lie than an ugly truth. Emilie Bierre gives a stand-out, expressive performance, as does Pelletier, whose looks of confusion and anger mirror how viewers will feel at times in this powerful film. Read full review.

Leslie Combemale The title of Canadian director Jeanne Leblanc’s movie Les Nôtres means ‘ours’ in French. What is ours as a community when a child within it is the victim of a sexual predator? Is it shame? It is the responsibility to believe them and get them out of harm’s way? Is it making sure they aren’t judged or blamed by their peers, and worse, by the adults around them? Emilie Bierre breaks our hearts as 13 year old Magalie, who is dealing with the confusion and complicated feelings inherent to being groomed and abused by a grown man in power, and is unsupported by family and friends. Les Nôtres is a good movie, but in this case being good means causing discomfort and evoking anger from its audience. These narratives must exist and be well executed, in order to give voice to a problem that continues in towns and cities around the world.

Jennifer Merin AWFJ.org has recently featured several compelling child abuse films — narratives and documentaries — as Movies of the Week, but Les Notres stands out and demands attention because it actually invites us into the psyche of the victimized girl as we observe the predator’s insidious behavior — which is never called out as such in the well-structured script and by the assembly of characters. The way the story unfolds gives us a chance to experience Magalie’s angst on a gut level, and to have our eyes opened to the subtle signs of abuse and grooming. The film might be too disturbing, too painful for sensitive young girls to see, but every parent of a young girl should view it and become wary and watchful for real life signs behind what is presented in this film. Read full review.

Cate Marquis In a quiet suburban Quebec town, a 13-year-old girl, still mourning the death of her father, falls prey to an older man, in the tense Quebecois drama Les Notres (Our Own). Suspense dominates writer/director Jeanne Leblanc’s chilling French-language drama, exploring a case of abuse told largely from the point-of-view of the girl, who mistakes predation for love, and set in a place where social pressures to not “rock the boat” abound. The heart-breaking, tense and well-crafted Les Notres also features a remarkable performance by its young lead Emilie Bierre.