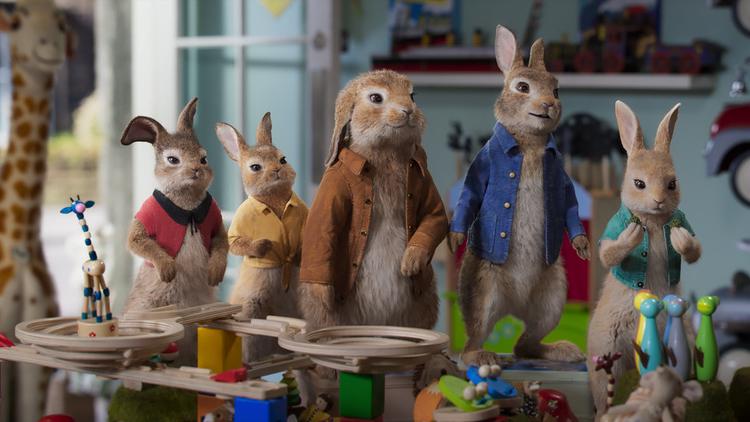 In 2018 when the Sony released the first ‘hip’ hybrid live-action/digital-animation adventure, I was less than enchanted by mischievous Peter (voiced by James Cordon). Nevertheless, on a $50 million budget, it earned $351.13 million worldwide. Hence, this sequel….

Things in the English countryside have changed now that the late Farmer McGregor’s nephew Thomas (Domhnall Gleason) has married benevolent Bea (Rose Byrne). She has turned the rabbits’ adventures into a story that attracts the notice of arrogant London publisher Nigel Basil-Jones (David Oyelowo), who envisions an edgy 23-book series, featuring 109 different characters.

While that means more about Flopsy (voiced by Margot Robbie), Mopsy (voiced by Elizabeth Debicki) and Cottontail (Aimee Horne), hapless Peter is cast as a ‘bad bunny.’

But Bea has serious reservations. “My book is very personal to me, and I don’t want it compromised,” she says. “I’d be spinning in my grave if it was ever adapted into some sassy hip-fest – purely for commercial gain, probably by an American.”

Meanwhile, disillusioned Peter decides to trek to the big city, where he becomes involved with a Dickensian gang of street-wise grifters, led by Fagin-like Barnabas (Lennie James), who plan to steal fruit from a Farmers Market…until he realizes who he really is and the kind of rabbit he wants to be.

Inspired by Beatrix Potter’s beloved children’s book series, it’s scripted by Patrick Burleigh and director Will Gluck and better than its mean-spirited predecessor – but not by much – regaling audiences with generic slapstick and derivative one-liners.

What’s most commendable are Animal Logic’s captivating animation and breathtaking visual effects which are seamlessly integrated into the live-action sequences. Founded in 1991, Animal Logic is based at Sydney’s Fox Studios, Rideback Ranch in Los Angeles and Yaletown in Vancouver.

On the Granger Movie Gauge, Peter Rabbit 2 scampers in with a snarky 6 as family-friendly fare.