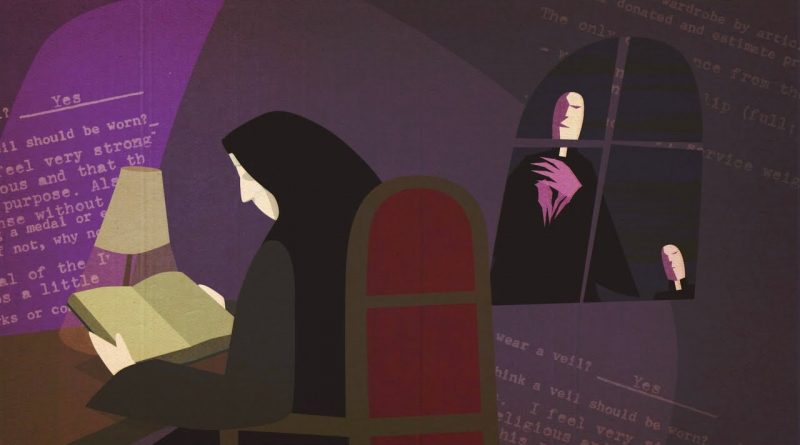 One Sister of the Immaculate Heart of Mary order says in director Pedro Kos’s award-winning documentary Rebel Hearts, “What does Mary have to do with revolution? Only everything. I can’t believe that the mother of God wouldn’t be as concerned as a mother could be about the problems which brought her son to earth.”

Therein lies the seed of why, in 1960s Los Angeles, a group of nuns chose to take a stand on social issues, and fight for their own autonomy and freedom from an oppressive, controlling church hierarchy built entirely around giving men all the power. It is a story that many might not know, but that had a lasting and permanent impact on the Catholic church. These women took vows to commit to a life of service and a love of God. Rebel Hearts shows that needn’t and indeed shouldn’t mean total subservience and blind adherence to what the controlling patriarchy of the church leadership demanded of them. Essentially these women were saying they were servants of Christ, not slaves of the church.

In 1960s LA, an order of nuns called the Sisters of the Immaculate Heart of Mary rebelled against the demands of cardinal James McIntyre and, by extension, the entire Catholic church. They had been directed that all the sisters of the order were required to teach wherever they were sent, without teacher training, and without pay. They were also expected to pray together at specific times every day, and wear a habit, traditional clothing that set them apart from the outside community.

Sister Mary Corita Kent designed art that expressed faith and love of God in a contemporary way, including expressions of protest against violence and war. Cardinal McIntyre called her a communist and her work blasphemous, and she was told she could no longer include representations of Christian iconography in her art. Sisters who took part in protests were admonished. In response, the women of the order confronted their diocese, demanding training, autonomy, and the ability to involve themselves in social justice issues, but they were repeatedly shut down. They appealed all the way to the Vatican, but in 1968 were denied, leading to lasting reverberations. 315 of 400 members left the order, and established the Immaculate Heart Community. Corita Kent didn’t just leave the order, she left the Catholic church, but still became a giant in the art world. The number of women becoming nuns has been declining steadily ever since.

Rebel Hearts uses archival footage as well as interviews conducted over two decades by producer Shawnee Isaac-Smith, and gorgeous animation inspired by Corita Kent’s pop art, to shine a spotlight on these extraordinary, deeply committed women. Producer Isaac-Smith’s films of the Sisters of the Immaculate are essential to telling the story at the center of Rebel Hearts. A number of those who were interviewed by her died before the documentary was completed.

It’s a delight to see the crew for the movie is gender-balanced. A number of other producers are women, as is director of photography Emily Topper, the score composer Ariel Marx, and animator Una Lorenzen.

I watched Rebel Hearts when it was released at Sundance Film Festival this year. Watching it again, I can say for sure the film had an impact on me personally, reframing experiences from my youth. In the late 70s, my sister and I were sent to an all-girl boarding high school run by the Sisters of Notre Dame, a teaching order. Though it was nearly a decade after most of the events represented in the documentary, there was quite a divide in how various nuns at the school lived in the world. I had a brilliant teacher who routinely threw her eraser, and once even silverware, at her students. She clearly would have been happier working at a university. I had no idea she didn’t have a choice. Remembrances of terror are now replaced with compassion, and anger at the thought that she probably never had a say about where or who she taught.

We had some teachers that welcomed critical thinking around belief and the teachings of the Catholic church, and others that expected blind faith. It was the teachers who demanded unquestioning obedience that drove teenaged me to not only reject Catholicism, but ultimately Christianity as a whole. One nun, who was a friend to me in high school, privately told me back then she thought women should be allowed to be priests. She also relished discussion with people of all other faiths and viewpoints. Some years after I graduated, she asked me to come back and talk about faith to her students, knowing I was agnostic. Though she has remained a nun all her life, she has done so on her own terms. I think in part she can thank the former Sisters of the Immaculate Heart of Mary for that.

Rebel Hearts may not call up personal experiences for many who watch it, but it will foster a new understanding and respect for women in religious orders. Mostly, though, it will enlighten viewers about an amazing group of heroines who were unwilling to shrink in the face of the patriarchy that was controlling or misogynistic, and denounced their every decision as though ordained by God to do so. Hooray for these badass women. I think Mary, Mother of their God, would be proud.