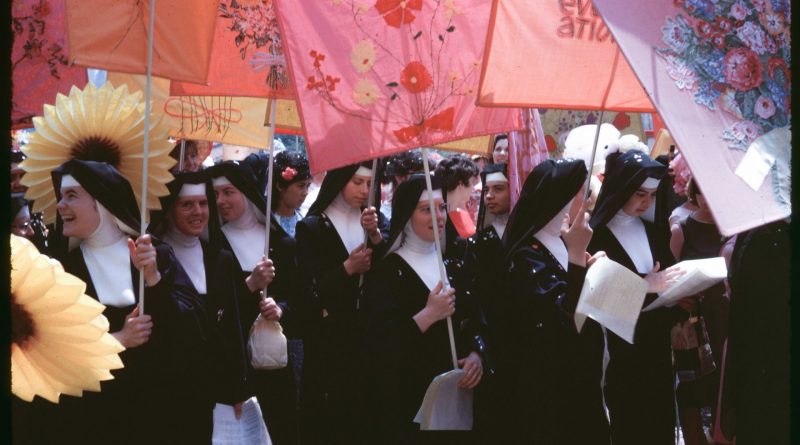 As someone who was a child during the ‘60s, I came of age in the golden era of nun films, whether on TV or in theaters. I was immediately drawn to the fact that their collective sisterhood seemed to be a source of female fortitude, whether it was Audrey Hepburn in The Nun’s Story, Deborah Kerr in Heaven Knows, Mr. Alison, Debbie Reynolds as The Singing Nun and, of course, Julie Andrews in The Sound of Music. But my all-time favorite film of this type was The Trouble With Angels starring Hayley Mills, which I usually still watch at least once a year.

I was raised a Catholic but attended a public school, so it was much easier to romanticize these women who often were strict disciplinarians who laid down the law without much male interference – or so I thought. At some point, however, it dawned on me that women were treated like second-class citizens by their faith. We had to wear weird doilies on our heads when attending Mass and be dressed like a bride when we made our First Communion. In fact, when my male friend saw me in the getup, he thought maybe my parents were marrying me off. At some point, I did wonder why there weren’t any altar girls allowed to assist the priest.

But after watching the documentary Rebel Hearts, I have seen how the rigid and outwardly sexist patriarchal hierarchy of the church took advantage of nuns at a time when women in general were fighting for their rights, both in their workplaces and in their homes.

In 1968, social unrest, civil rights and the feminist movement took their causes to the streets. But one group of free-thinking Los Angeles nuns, known as the Sisters of the Immaculate Heart of Mary had the gall to dare to push back against the harshly conservative-leaning Cardinal James McIntyre, who oversaw the Archdiocese of L.A. This former Wall Street runner who was business-minded saw financial gain by building an inordinate number of Catholic schools while using the nuns as unpaid teachers, despite the fact they had no training.

However, he found his liberal match in Anita Caspary, Mother General of the Immaculate Heart Sisters, who owned and ran their own college in Los Feliz that was beyond the grasp of the cardinal’s powerful reach. This liberal institution of learning was able to mix faith and theology alongside art and science. In fact, one member of the staff, Corita Kent, became a highly regarded creator of pop-art and would be featured on the covers of Time and Newsweek magazines before she died in 1986.

After the rule-changing outcome of the Second Vatican Council, many of the traditions of the church were modernized. While one nun proudly stood beside the peaceful protestors who joined Martin Luther King Jr.’s march while being called “a whore,” other sisters took it upon themselves to modernize the heavy and wimpled old habit of yore while opting for dresses and showing off their flattering hairdos. Meanwhile, McIntyre’s reign that began in 1948 would blessedly end in 1970.

Director Pedro Kos breaks up his story with some colorful animated visuals and wisely focuses on Kent’s bold creations while providing an upbeat pop soundtrack. Some of the news headlines from the time also flash by, including “Modern Nuns vs. Vatican,” “Defiant Nuns Want Freedom” and “The Pope’s Unruly Flock.” While his subject could have been treated as a downer, you can’t help but cheer inside when the majority of the sisters decide for a civilian life.

Kos primarily uses archival talking-head footage from the nuns, but only a few make more than a fleeting impression. I wish he added more information about their lives before and after they made the decision to start their own organization to fight for causes and raise awareness about society’s ills. The film starts off with former nun Helen Kelley attending the Woman’s March in 2018 while another sister brings up the 2017 Charlottesville rally as an example of how the times haven’t changed as much as we think they have.