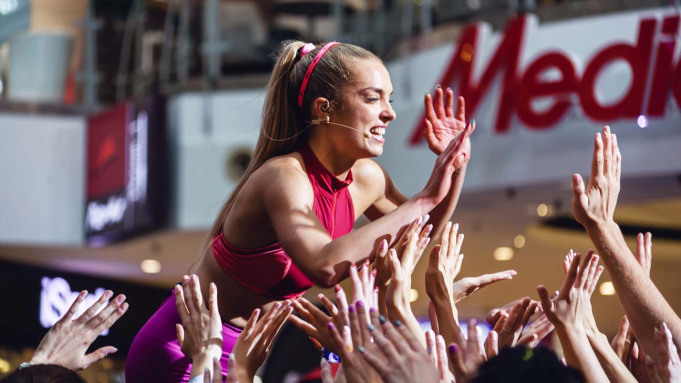 The unbearable comfort of your phone’s glow: This modern-day drama from Magnus von Horn is not your typical moralizing punch at Social Media, but rather a nuanced look.

A few years ago I posted a picture of my brothers and me on Instagram. It’s a great picture, really. People would write comments like ”You look so happy!” below – rightfully so. And yet it was a miserable moment in my life.

In a nutshell, this is what Swedish writer-director Magnus von Horn’s Polish-language film Sweat is about: the crater between the lives we live offline and the carefully curated online alter egos we share. The things we want people to see and the things we keep in our hearts.

The young Polish woman (the magnificent Magdalena Koleśnikin her first leading role in a feature) at the heart of von Horn’s sophomore drama is a shamelessly self-promoting fitness influencer and Social Media celebrity. She films herself eating, walking up stairs (it’s healthy!), driving, and promises her fans that they can have nice legs just like her, if only they work hard enough on themselves. She has achieved some fame in Poland. Companies send her tons of free stuff, protein shakes, outfits, and she is happy to feature it all in her little videos.

When we meet Sylwia for the first time, she works out on a stage in a large Warsaw shopping mall, blonde mane, pink leotard, and flawlessly manicured fingernails, shouting inspiring slogans in front of an amped-up crowd. She’s beaming and so are her fans, which are hoping to be just as beautiful as her.

“Your posture is perfect, you could replace me!” she says to a woman. Later, when she is alone in the locker room, you can’t help but feel that, maybe she wants to be replaced. She had a social day. Hundreds of people posted that they love her, hugged her, her latest selfie was probably watched thousands of times, and yet, she can’t help but feel crushingly lonely. She’s got more than half a million followers on Instagram, but no friends.

When Sylwia shares an emotional video in which she speaks openly about the fact that she feels depressed and lonesome, her sponsors don’t like it. Who wants to see their product in such a negative context? On top of that, a solitary admirer (Tomasz Orpinski) feels encouraged to get closer to her, lingering in his car in front of her apartment – with one hand in his pants. It’s sometimes shot like a paranoia thriller, often with a handheld camera, and with a kinetic documentary feel. The lens films Sylwia in her home and on the street as if from the perspective of the stalker, who records himself on video to tell her how lonely and pathetic he feels. He goes way too far, as does Sylwia, who panics, but in a way they need each other. Sweat skillfully lays bare the voyeuristic nature of Social Media and that very same nature’s dependence on people’s narcissism. Continue reading on THE FEMALE GAZE