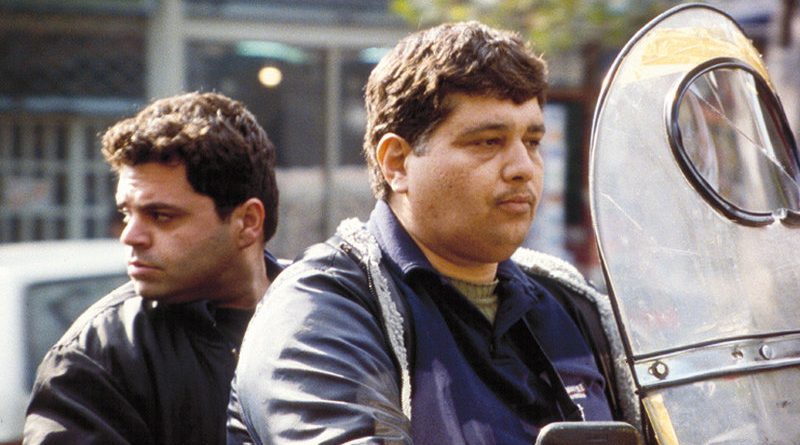 An ideal partnership is realized in Iranian director Jafar Panahi’s Crimson Gold, written by his Iranian film mentor and friend, Abbas Kiarostami. Though Iran regularly bans both men’s work and, upon occasion, detains them, Panahi and Kiarostami continue to make astonishing films, this one shrewdly critiquing social inequity through a pizza delivery man’s experiences over two days.

Though avoiding any direct engagement with or attacks upon the state or government authorities, nevertheless the Iranian Ministry of Guidance judged Crimson Gold too “dark” and banned public distribution as well as private showings. The film’s exposure of the divide between rich and poor, and the hypocrisy accompanying religious and social behavior, will emerge unobtrusively but clearly in the course of daily interaction, suggesting the unacceptable revelations that led to its prohibition.

After a dramatic puzzling robbery in the opening scene, most of the action blocked from view, subsequent events calmly capture everyday activity. A flashback introduces Hussein Embadeddin, a nonactor playing himself, an actual pizza delivery motorcycle driver with paranoid schizophrenia and an Iran-Iraq war veteran, a detail every Iranian would understand from a passing comment. In a coffee shop, Hussein meets with his friend Ali who has secured papers needed for him to marry Hussein’s sister. A pickpocket con man lecture Hussein and Ali, assuming insultingly that they’re also petty criminals, though they do grab purses. One of those purses contains a receipt for a very expensive item, leading to Hussein and Ali visiting the store only to have the door closed on them.

Most of the remaining incidents involved Hussein trying to get pizzas to customers. Most significantly, police guarding a party in a wealthy Tehran neighborhood (dancing and drinking involved) forbid Hussein entry. Another visit to the jeweler, who treats Hussein, Ali, and his fiancé with contempt, exacerbates Hussein’s anger. Observance of an arrest, a worker killed in an accident, and a late delivery to a very wealthy man lead to more implosive fury with dire consequences. Never preachy, Crimson Gold reveals Hussein’s life through his perspective and delivers a deeply upsetting, solid impact. In Persian with English subtitles.