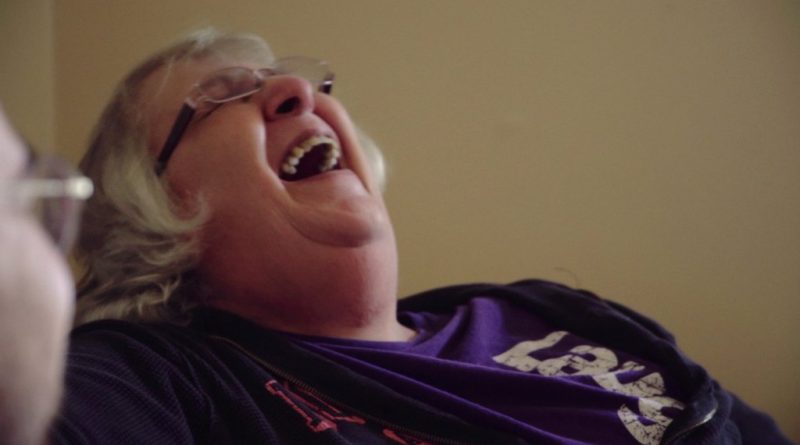 The result is the refreshingly honest and moving documentary Julia Scotti: Funny That Way, a project that was five years in the making. We are first introduced to our subject in animated form, who Scotti describes herself as “just a baby born male who never felt quite right “ would be married several times and fathered two children before he figured out she was a trans woman in her late 40s. Her transition to her new identity began at the age of 50.

Back in the in the ‘80s heyday of stand-ups, she went by the name of Rick Scotti while performing in comedy clubs, sharing bills alongside Jerry Seinfeld and Chris Rock while touring the country as an opener for Lou Rawls and Frankie Valli and the Four Seasons. But after she took the plunge to proceed with her reassignment surgery, Julia was shunned by her ex-wives, friends and comedy chums. Most hurtful was being separated from his kids after losing out on shared custody. Julia would work as a teacher for seven years before returning to comedy in 2011.

Eventually, her now adult son and daughter would finally embrace their dad’s true identity after 14-year absence in their lives. In fact, Dan is following in Julia’s footsteps and is seen trying out his own comic material during an open mike night. At one point, they watch old video tapes of Julia’s old routines before she came out. They both are taken aback by non-PC sexist jokes about transgender people, one that Julia doesn’t even remember doing.

If you watch ever have watched America’s Got Talent, you might recognize Julia, who was a quarter-finalist on Season 11 and caused judge Simon Cowell to laugh heartily during her bleeped routine about not giving up her seat on a lifeboat to a younger woman on a sinking ship. She also claimed the title of being the first transgender comedian to appear on national TV.

A health scare hovers over the conclusion of the doc when the lifelong smoker requires quadruple heart-bypass surgery. But Julia soon recovered and while vowing to kick her butts to the curb. She is in the midst of recording her second comedy record and is featured in the Showtime cable special More Funny Women of a Certain Age. Anyone who dares to go on a I’m Not Dead Yet tour is all right with me. The film is available on VOD on various digital streaming sites.