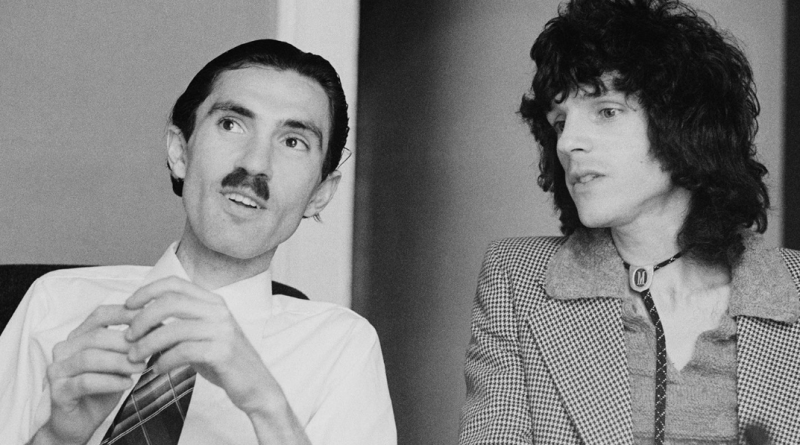 For someone who is incredibly fond of clever puns, there was no way I could keep from buying the album Kimono My House in 1974. That was my initial introduction to the cultish art-pop group Sparks, especially when you saw the two eccentric Mael brothers who fronted the band. The bombastic hit single from that LP was This Town Isn’t Big Enough for the Both of Us but my fave cut was Hasta Manana, Monsieur, which featured the kimono wordplay in its lyrics.

The next year, I got to witness the Maels in person at the crumbling Century Theater in Buffalo, New York. Keyboardist Ron sported his Hitler-style mustache and a bit of a leer while manning a keyboard while his matinee-idol younger brother Russell hit the high notes with an angelic falsetto. The pair opened the show that also featured the Dutch musicians Focus, whose lone hit at the time, Hocus Pocus, featured yodeling, and German band Kraftwork, who robotically snored through their synth-pop hit Autobahn. But, for me, the show was basically over when Sparks left the stage.

I admit I hardly kept close tabs on Sparks over the years. So when I heard that filmmaker Edgar Wright of Shaun of the Dead and Baby Driver fame, who knowns a thing or two about the power of music, was coming out with a documentary titled The Sparks Brothers, I was ecstatic to be able to catch up on what the group was doing since I lost track of them. It makes sense that Wright would be a fan of theirs since, like his idols, he is not one to avoid grandiose excess in his own work. At 140 minutes and with more than 80 brand-name witnesses ranging from fellow musicians such as Beck, Flea and Todd Rundgren, who produced their first album; actors including Mike Myers and Jason Schwartzman; and Amy Sherman-Pallindino and Dan Pallindino, who featured Sparks in the finale of their series Gilmore Girls. All are glad to attest to the unique genius of the eccentric California-born siblings, often mistaken for being British given their Euro vibe and now in their 70s, who had an innate way of reinventing themselves and their music over more than 50 years.

While some would not be blamed for thinking that the two might be alien beings given their unusual personas, their interests in film and music came from the revered artist father. Wright tries to humanize them, with one of the more surprising factoids revealed was that an 140 pound Russell was a quarterback in high school. Sadly, their father died when Ron was 11 and Russell was 8. Meanwhile, their mom was hip enough to take her boys to see the Beatles not once but twice.

Wright purposely uses visual devices such as stop motion and 2D animation, re-enactment video and even moving cameras when talking heads are on screen. He also revels in the campier aspects of their personas and their more unusual song topics such as Tits, which happens to be about breast milk. They also indulged in the popular formats of the times, whether it is disco or new wave synth-pop.

What is somewhat disappointing is that Wright barely touches on many personal subjects, not even mentioning that the guys are Jewish, given Ron’s association with his Hitler fuzz above his lip. Did they ever marry, did they ever have kids, and did they date fellow celebs? The lone answer comes from Jane Wiedlin of the Go-Go’s, who confesses she and Russell dated when they collaborated on the 1993 song Cool Places. We do learn how Russell likes his coffee and that Ron’s massive snow-globe collection includes one with the Teletubbies.

You will hear more about Sparks this year as their long-overdue dream of collaborating on a movie comes true, thanks to French filmmaker Leos Carax (Holy Motors), when their musical Annette starring Marion Cotillard and Adam Driver opens the Cannes Film Festival this year. It will eventually land on Amazon on August 20.