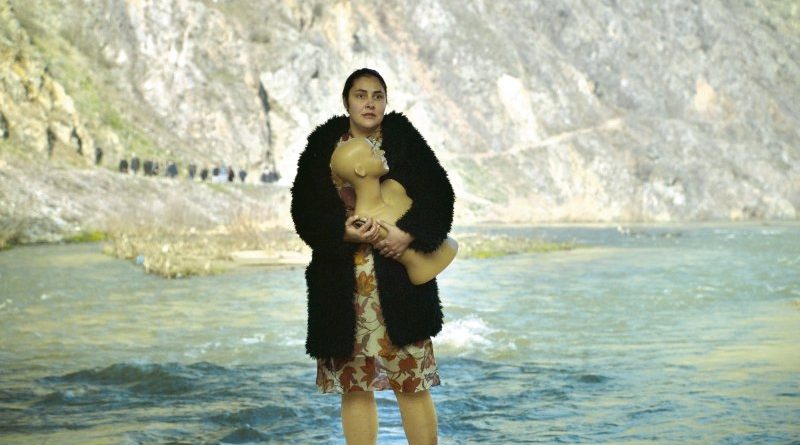 A familiar story–a downtrodden woman finally steps up and asserts herself–is given an exotic twist (at least for American viewers) in this Macedonian story of fate, media and off-beat empowerment.

Unmarried, unemployed and unmotivated, 32-year-old Petrunya (Zorica Nusheva) still lives with her parents despite the fact that she holds a university degree (albeit in art history, which is, apparently, every bit as economically useless a concentration in Macedonia as it is in the US); her father is warm and devoted but clearly doesn’t wear the pants in the family. That honor goes to her mother, mortified that her only child is jobless, boyfriendless, plus-sized and disrespectful. And Petrunya manages to augment that list of faults by–pretty much accidentally– defiling a centuries-old tradition: Retrieving an ornate cross from the town’s winter-frigid river into which it has been thrown by an Orthodox priest, flanked by two of his brethren. Petrunya–returning home after a dreadful job interview secured by a pitying relative during which the hiring manager simultaneously tries to feel her up and tells her she’s too fat to be fuckable, impulsively dives in–winter coat and all–enraging a swarm of cocky, preening young men deeply wounded by the fact that a fat girl has deprived them of their chance to demonstrate and revel in their masculine superiority. By tradition, the retriever of the cross is promised a year’s worth of good luck and it seems clear that luck won by the being the scantily clad dude who rises from the water with the cross in hand is largely of the getting-laid kind–totally wasted on any chick, let alone a chubby frump in a plus-size granny dress.

All of which sounds incredibly sad but ultimately isn’t, not because Petrunya is a self-possessed feminist waiting to burst out of her cocoon but because she isn’t. She’s smart. And she has a good friend in Vaska (Violeta Sapkovska), who’s cute and runs a sad little boutique out of her apartment (financed by her married boyfriend), but that and a denar will get her on the bus. Petrunya’s dad is on her side, but her mother isn’t–in fact, she’s horrified that her daughter has defiled a holy object with her fat-girl fingers–and while local journalist Slavica (Labina Mitevska, the director’s sister) is keeping Petrunya’s name in the public eye. But her only skin in the game is the hope that the story might give her locale career a national boost; should there ever be a Macedonian remake of Blonde Ambition (2007), Mitevska is a shoe-in for Nicole Kidman’s role. That said, it’s Mitevska’s Slavica who, with no fictitious writing staff or producer feeding her lines, is the one who observes on camera: “It’s 2018, but it still feels like the Dark Ages in Macedonia. Perhaps that’s why they call the country timeless.” Nice one. But for Petrunya, it was just a moment–her moment. She was there, unnoticed as usual, and she seized it: She dove, she swam and she retrieved the prize.

And it’s Nusheva–a first-time film actress with a background in comedic theater–who reveals a powerful screen presence and rises to the responsibility of ensuring that the film’s center holds. That said, kudos also to Macedonian actress-turned-director Teona Strugar Mitevska (who studied in the US, at NYC’s Tisch School of the Arts) and her siblings, Labina and their brother, Vuk. Together they founded the production company Sisters and Brother Mitevski, which produced Petrunya.