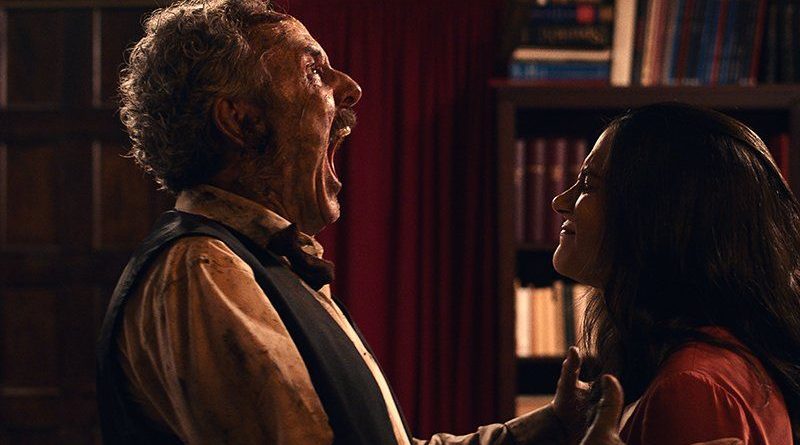 Comedy can be a real killer in the breezy horror satire Too Late from husband and wife team D.W. Thomas and Tom Becker.

Violet (Alyssa Limperis) is a wannabe stand-up comic working a dead-end job as an assistant to seasoned comedy veteran Bob Devore (Ron Lynch). Fledgling comics look up to Bob, hoping his star power will rub off on them if they could only get a spot in his comedy variety show, Too Late. But there’s one thing Violet knows about Bob that these comics don’t – he can be a real monster. Literally.

Bob isn’t just a power-hungry bully, he’s also some kind of unspecified vampire-werewolf-monster thing who unhinges his jaw and devours people whole. And he just happens to have developed a taste for young comedians who come supplied by Violet as she’s out scouting for new blood for Too Late. Ingesting the comedians’ skills as he digests their corpses, Violet is complicit in Bob’s feeding – a fact he holds over his assistant’s head, threatening to keep her in her place. When Violet realizes Bob has his eye on her beau, up-and-coming comic Jimmy Rhodes (Will Wheldon), she’s determined to stand up for herself and get out from under his shadow once and for all.

Directed by Thomas from a script by Becker, Too Late is a smart horror satire that surprises at every turn with its witty script and timely theme. There’s no doubt the world of comedy is full of monsters, especially when you’re a woman.

Set in the cutthroat male-dominated Los Angeles comedy scene, Violet has encountered not just the literal monster Bob, but plenty figurative monsters as well. There’s the pushy Boston comedian Dax (Billy Breed) whose unwanted sexual advances force Violet’s hand, the famous comic-turned-movie star Chase Morrow (Brooks Whelan) with an out-of-control ego, and countless male comedians who want to use her as a stepping stone to success. Everywhere Violet turns, the men of comedy are there to make sure she knows where she stands in the toxic boys’ club built on rivalry, egos, and blood-thirsty ambition.

With a tight 80-minute runtime, it’s no surprise both Thomas and Becker have worked as editors in the past (Thomas is also editor of Too Late). There’s not a wasted ounce of screen time in the indie production that makes the most of its micro budget. Led by an engaging performance by Lempiris, Too Late keeps its horror off-screen, saving the moments of gore for when it really counts and instead focusing on its characters and the comedy. And for once, the stand-up comics in the movie are actually amusing thanks to some well-written jokes that earn genuine laughs. Becker’s script is not just funny it’s wholly original, walking that tricky line between comedy and horror with great success.

Too Late is a great first feature from this team and a promising launch pad for YouTube comedian Lempiris.

Too Late opens in select cinemas and digital platforms on June 25.