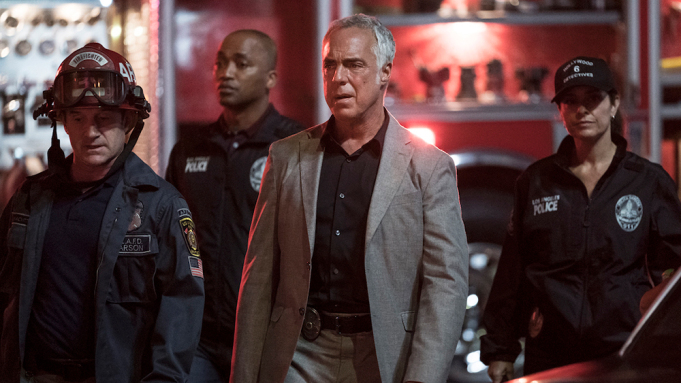 The seventh, final season of the police procedural Bosch celebrates the attitude and style of jazz, its unique signature. In other words, Hollywood Division homicide detective Harry Bosch plays jazz regularly in his glass-enclosed house perched overlooking the valley, congratulates daughter Maddie on her taste in music and spot-on recognition of specific jazz recordings, and calls his dog Coltrane.

That accounts for only the explicit references. In fact, the eight episodes here unfold like a jazz jam session with a series of solos and riffs after the initial establishment of a through line to which the digressions will return, as with the musicians in a jamming group. Each character has his or her individual attributes adding texture and themes.

This season the central crime is a purposely set apartment building fire that tragically claims several victims, most painfully a ten-year-old girl named Sonia Hernandez, as Bosch religiously reminds anyone who calls her “tamale girl.” He insists on saying her name, an important reminder of all real-world victims whose names must be spoken. He can’t let it go, as the opening song over the familiar, fabulous credits of split screens, top versus bottom, symbolically asserts.

Vignettes move effortlessly between the overlapping personal and professional interactions in all the central characters’ lives with seamless merging of the two. The impressive, understated acting by all the principals drives events with Titus Welliver as Bosch the solid anchor with sophisticated taste, as impressive in still, silent moments as he is in action. It’s a joy to watch this interracial cast mesh like a fine jazz band. Based on Michael Connelly’s novels, Bosch takes its place among the most understated, best tv series, streaming on Apple+.