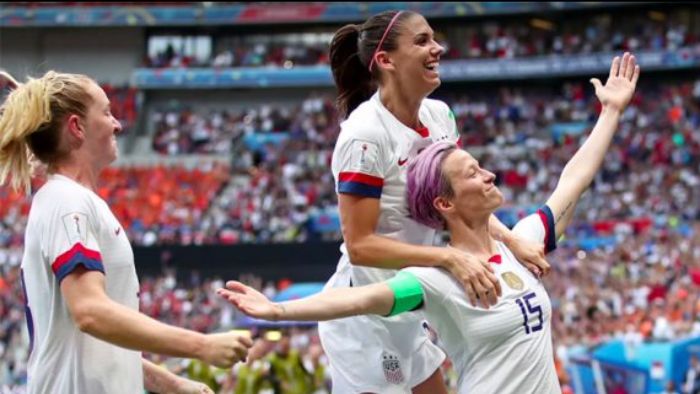 Megan Rapinoe is just as good at kicking ass as she is at kicking soccer balls.

Rapinoe and her teammates are the focus of LFG, a documentary on HBO Max about the United States women’s national soccer team (USWNT) and their fight for equal pay against the U.S. Soccer Federation.

You don’t have to know anything about soccer or care about sport at all to be inspired by these women and infuriated by the inequities they face as world class athletes in their sport of choice.

Hard to believe that in the year 2021 these woman — who are the world champions — have to fight to get paid as well and treated as well as their U.S. male counterparts; the lacklustre men’s team is currently languishing around 20th spot in the FIFA men’s world rankings.

(The men’s team, it should be said, is fully supportive of the women’s team and their expectation of equality.)

LFG is all about the fight for that equality and the legal battle that has shadowed the US women’s team for the last few years.

Rapinoe and fellow players Kelley O’Hara, Becky Sauerbrunn, Samantha Mewis, Christen Press, and Jessica McDonald are all interviewed here, talking about why the team is suing their employer, the US Soccer Federation, for gender discrimination.

As their lawyer Jeffrey Kessler says, “They pay the women less even though they are world champions. Just for showing up, the men get more.”

Besides more money, the men’s team travels on charter flights, stays in five-star hotels and gets a lot more in the way of training, coaching and marketing resources.

LFG shows the women’s team winning the 2019 World Cup, the one thing they believed would really get the world on their side in this pay equity battle.

Indeed, when the Americans won over Holland in the final game of the World Cup, the crowd cheered their victory by chanting “Equal Pay! Equal Pay!”

But then comes the tension of mediation with the U.S. Soccer Federation and the exigencies of the lawsuit; there is such disrespect displayed toward the women, their PR rep says.

“There’s this moment of wanting to punch someone in the face,” she adds.

Unfortunately, a judge dismissed the USWNT lawsuit in May of 2020 over a contract issue. It’s hugely disappointing, but that doesn’t mean the fight is over.

As Kessler says in the film, a lot of young women and girls are looking up to the team on this, “So we’re not giving up.”

Megan Rapinoe had us at “I’m not going to the fucking White House,” during the Trump administration, and she and her soccer colleagues will completely win over audiences with this documentary.

Directors Andrea Nix Fine and Sean Fine cover a lot of ground here while making it all seem effortless, creating a hugely engaging film from a blend of complex personalities, balletic soccer footage and a difficult legal situation. It doesn’t hurt that the women athletes are so articulate and persuasive. They are given free rein to talk about their hopes, their game and their intentions for future generations of female soccer players.

You will root for them whole-heartedly.

The title, LFG, stands for Let’s Fucking Go — rallying cry of the USWNT in their efforts on behalf of all women athletes. All women, in fact.