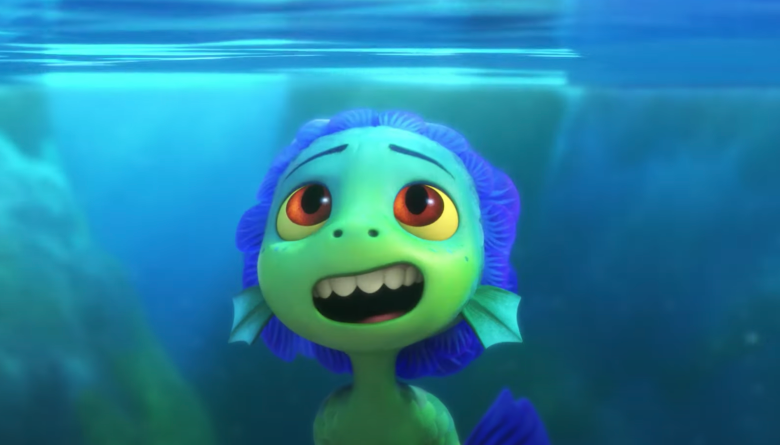 Once upon a time near a beautiful seaside town in the Cinque Terra region of the Italian Riviera, two young mermen – or, as the locals called them, ‘sea monsters’ – spend an unforgettable summer together.

Despite cautionary warnings from his parents (voiced by Maya Rudolph/Jim Gaffigan), teenage Luca (voiced by Jacob Tremblay) is curious about the world that’s above the surface of the sea where he and his family live.

Venturing out of the water and onto the beach one day, Luca discovers that, when he dries off, his fish-tail morphs into legs. He’s not quite sure how to use these strange appendages but a new-found friend, fellow sea monster/boy Alberto (Jack Dylan Grazer), encourages him to experiment with walking, then running and climbing.

Visiting the ‘human’ town of Portorosso in search of a Vespa scooter, Luca and Alberto befriend rebellious Giulia (voiced by Emma Berman) who is determined to win the annual triathlon, consisting of swimming, pasta consumption, and bicycling down winding, stone-paved streets, despite taunting from obnoxious Ercole Visconti (voiced by Saverio Raimondo).

Having shown Giulia’s father (voiced by Marco Barricelli) where to find the best spot to fish, Luca and Alberto are readily accepted onto her ‘team’ for the upcoming competition while keeping their ‘true’ identities a secret from the townspeople who are terrified of ‘sea monsters.’

Based on a story by Enrico Casarosa, Jesse Andrews and Simon Stephenson, it’s freshly scripted by Jesse Andrews and Mike Jones. Their fantasy-quest chronicles how a fervent, if short-lived friendship can change one’s life forever.

On the Granger Gauge of 1 to 10, “Luca” is a whimsical 8, sweetly splashy, family-friendly fare, streaming on Disney+.