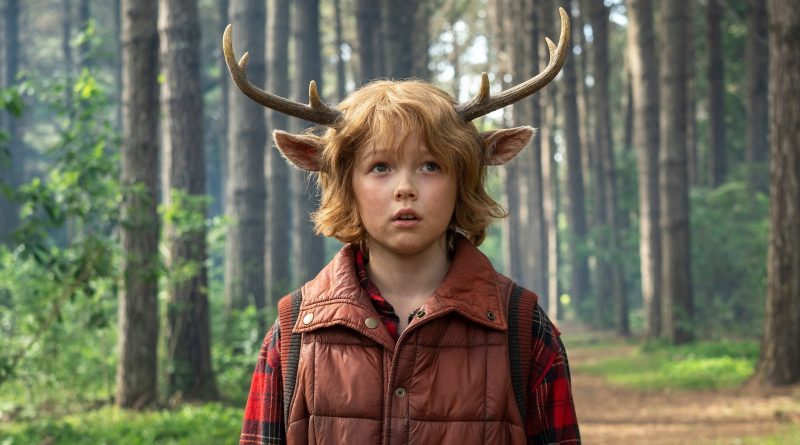 If you’re looking for a Netflix series to stream, I highly recommend Sweet Tooth. As you might guess from the improbable title, it’s an unusual, post-apocalyptic tale, one that tugs at your heart.

As the narrator (James Brolin) explains, in the decade after the ‘Great Crumble,’ when much of humanity succumbed to the deadly H5G9 virus, human mothers began to give birth to half-animal infants.

In Episode #1, Pubba (Will Forte) trudges off into the wilderness with adorable baby Gus, who has the twitchy, furry ears of a deer and budding antlers. Settling into a cabin, Pubba teaches Gus how to survive within their idyllic compound, cautioning him to never, ever venture beyond the fence that separates them from the perils of the outside world.

Desperate to find his mother, Gus is determined to travel to a bleak place in Colorado where she was last seen. But along the way, he and often-exasperated Big Man must evade the menacing ‘Last Man’ vigilantes who hunt hybrid children, blaming them for the pandemic.

Subplots abound. There’s the orphaned cult leader Bear (Stefania LaVie Owen), along with reclusive Aimee (Dania Ramiriez), who lives in an abandoned zoo. Plus Dr. Singh (Adeel Akhtar), working on a cure for the virus, and despotic General Abbott (Neil Sandilands) of the Last Men militia.

As for its prophetic timing, Lemire notes, “I wrote the book over a decade ago, so obviously that has no connection with what’s been happening with COVID-19.”

On the Granger Gauge of 1 to 10, Sweet Tooth is an intriguing 8. All eight episodes are streaming on Netflix, and a second season seems inevitable.