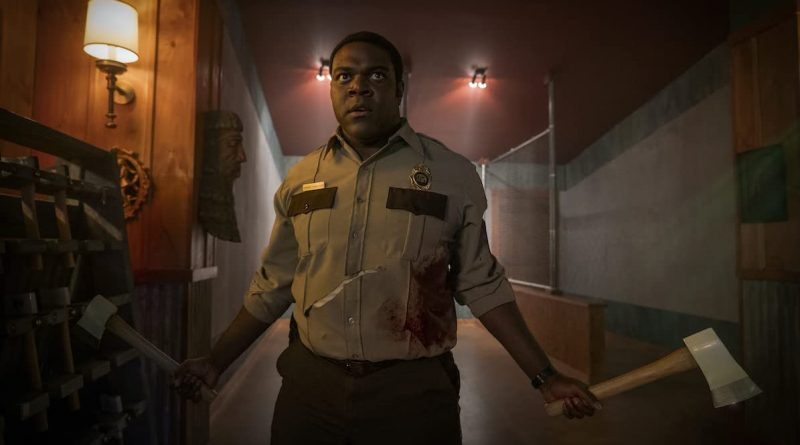 Based on the virtual-reality game of the same name, Werewolves Within is, well, a VR game stripped of the fundamental appeal of VR games: the participation factor. So it comes out of the gate with same handicap that’s hobbled game-based predecessors ranging from the dismal Clue (1985) to Super Mario Brothers (1993) and even Tomb Raider (2018), which at least gave Angelina Jolie in a an opportunity to show off her action-movie bona fides… though I think it’s fair to say that it was her booty shorts and skin-tight t-shirt that really put bodies in seats. But Werewolves Within is a lovely surprise: It has a nicely underplayed tongue in cheekiness–its tone owes a great deal to Joe Dante’s The Howling (1981), a high-water mark in the annals of tongue-in-cheek horror movies–and it manages to pull off beautifully the balance between horror and humor. That’s not as easy as the cream of the crop make it look, and the proof is in countless horror comedies are neither funny nor the least bit suspenseful.

Ranger Finn is dispatched to Beaverton, a quirky small town whose population–which from crusty locals to cute gay guys–is divided over the construction of an oil pipeline. On the one hand, it promises jobs and an influx of cash to a town with not a whole lot of industry, on the other, well, it’s an oil pipeline: You have to have been living in your mother’s basement without tv or internet access since birth not to have seen photos and footage illustrating the downsides of having a pipeline in your backyard.

Enter the outsider, ranger Rick Finn (Sam Richardson, of Promising Young Woman), the total sweetheart of a tree-hugger who’s assigned to oversee construction and is seriously lacking in authority-figure cred: His landlady automatically hauls his gear for him, so he clearly isn’t being set up as the guy ready to go toe to toe with nasty Sam Parker of Midland gas, let alone who- or whatever that starts savaging the townspeople. And okay, yes, it’s a werewolf–not a huge spoiler given that the movie is based on a popular VR game of the same title. It’s basically a riff on the largely–and unjustly–forgotten The Beast Must Die (1974), minus the 60-second “werewolf break” that dares viewers to guess who’s the secret wolf before the big reveal. And it’s a lot of fun.

The shorthand is Northern Exposure meets, yes, The Howling, but it’s clear that writer Mishna Wolff (yes, that is her name) and director Josh Ruben both respect and appreciate the horror genre enough to tweak it gently and while delivering the goods, including a terrific transformation scene that pays its respects to John Landis’ An American Werewolf in London (1981), another standout in the annals of movies that aspire to find the sweet spot where horror and humor compliment rather than undermine each other. When you add the fact that the generally dismal history of both game-to-movie adaptations and humor/horror-movie mashups, that’s quite an accomplishment. It’s good fun, with the caveat–or endorsement, depending on your tolerance level–that it doesn’t stint on the mayhem: Werewolves Within is plenty gory. On the other hand, it’s, well, nice, to see a movie in which the nice guy stays nice, even after he starts kicking ass and taking names.