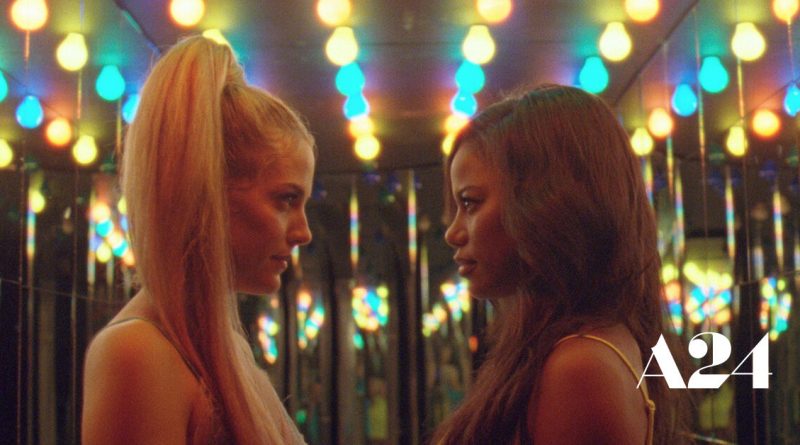 “Y’all wanna hear a story about why me & this bitch here fell out? It’s kind of long but full of suspense.” – Zola

“What, were you homeschooled? – Zola

A24 presents Zola, directed by Janicza Bravo and written by Bravo, Jeremy O. Harris, A’Ziah King, and David Kushner. The film is based on actual tweets by King and a subsequent article by Kushner.

Noir dramedies based on “real people” and “true events” always resonate deeper and more receptively with those who find the characters familiar, relatable, and through the magic of great scriptwriters and stellar acting, redeemable.

In Zola, writer and director Bravo, gives us a female “almost buddy” film that goes horribly south, showing off the worst of a particular class of white people, black people, and skeevy characters in-between the lot. Nobody, save for Zola, is someone you would want to know, but they sure can be funny.

The upside is Zola (Taylour Paige) survives entrapment, kidnapping, a near-rape, being held at gunpoint to live to tell this tale. The downside is we have to endure the people she befriends and naively trusts with her precious life. All of these mistakes were made on the whims and salesmanship of a hopped-up honky hoe named Stefani (Riley Keough), who complimented her on her “tits” and talked a hustler’s game of dancing for big bucks in Florida. Because nothing bad happens in Florida.

Paige as Zola is flat-out gorgeous, and she seems to be the smartest one in the cast of nincompoops, ne’er-do-wells, and stone-cold criminals out for themselves.

In the flesh for cash biz, whether it’s a handy in the parking lot, a blowie in the bathroom, or full-on intercourse for fifteen minutes, sex work is rife with scumbags and parasites. Women do not come out on top. If they do, it’s usually because they have become the oppressors and boss pimps themselves.

In essence, Zola the film is a cinematic retelling of Zola’s actual viral tweets, none of which have been fully verified but damn if it wasn’t a fantastic, time-wasting, fun read. And like Scorsese’s based-on-true-events film Goodfellas, the cast is indeed a memorable one. This nightmarish road trip is filled with darkly humorous moments and a tortured performance turned in by Nicholas Braun from the HBO drama, Succession. Braun’s character Derrek is a dim cuck who annoys Zola with his nattering dreams of lofty TikTok auteur grandeur.

As fate would have it, our titular heroine is a pole-dancing Hooters waitress whose table of “fruit loops” includes Stefani (Keough), who somehow puts a witchy white girl spell on our beguiling Zola and beckons her to come along on a fun trip to Florida.

Sadly for Zola, she hops in the swanky ride and meets Stefani’s pimp, a weirdly accented gangster type referred to as X (Colman Domingo), and Derrek, Stefani’s delusional boyfriend missing some IQ digits. This Mercedes SUV becomes a prison on wheels as this motley crew heads south. In the course of realizing the mess she is in and witnessing Stefani turn a trick, Zola flips the pimp script on X, getting Stefani way bigger bucks by marketing her moneymaker for solid cash.

This earns Zola the respect and the menacing side of X, who suddenly puts Zola in charge of babysitting and guarding Stefani. At the same time, Derrek makes unfortunate choices in confidantes back at the sleazy motel. Ones that come back to bite everyone in the end.

Granted, this is a wild ride of a film and a cautionary tale for any young woman who thinks she can earn some extra cash by “trapping” (prostituting) after a hellacious aerobic pole dancing workout where toothless pallid men think to compliment Zola by comparing her to Whoopi Goldberg. Yeah. This film shows how easy it is to be swept up into a bonafide sex trafficker’s ring and become just another piece of flesh for sale. Expendable. Disposable. Forgettable.

Not to mention the visual lensing is spot on for the soul-sucking work that banging total strangers offers, with brilliant montages and closeups of ugly faces and even more grotesque male genitalia that really shows these sex workers’ work hard for their money. No shame, no judging, just … wow.

Zola is not a madcap roadie flick but a frenetic and anxiety-producing cautionary yarn. It is a brutal reminder that men call the shots and can easily make prey out of any woman. Domingo leaves an evil chill, and Taylour Paige is quite remarkable in this tale of bad intentions and regrettable actions, thanks to the siren songs of Riley Keough’s Stefani. Her crafty revisionist con-artist—in real life—would be dead before age thirty.

And like Goodfellas, the Henry Hill of this story, Zola, escapes, and we surmise lives like everybody else, it didn’t mean anything…she’s just an average nobody living like a schnook with a large Twitter following.