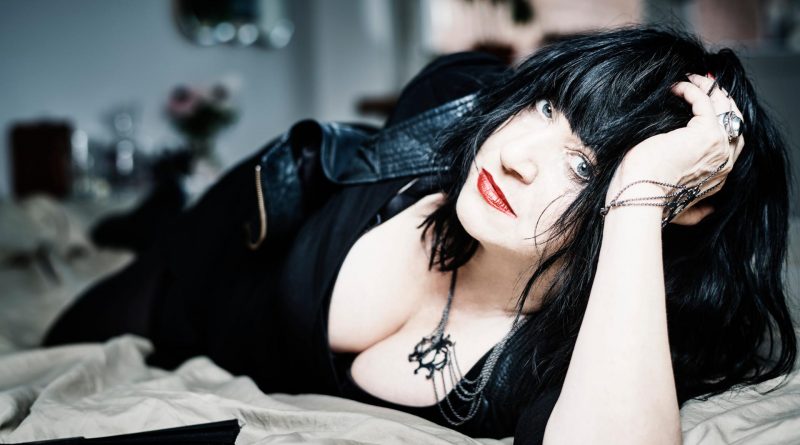 Brash. Confrontational. Provocative. Audacious. Empowered. All of these words describe both No Wave icon Lydia Lunch and Beth B’s engaging documentary about her, Lydia Lunch: The War Is Never Over. Offering an efficient but comprehensive chronicle of Lunch’s personal journey and professional achievements, the film is both a celebration of a trailblazing woman many fans have known and loved for decades and a solid primer for those who aren’t already Lydiaphiles. Lunch is frank about her early life: Abused by her father from a young age, she fled her hometown in upstate New York for the excitement and freedom of Manhattan when she was just 16. The city that welcomed her in 1975 was gritty, angry, and raw — just like her. She started making a name for herself in fringe music circles while performing with bands like Teenage Jesus and the Jerks, also trying her hand at spoken-word performance, explicit films like Fingered, and any other artistic idea that took her fancy. Outspoken, opinionated, and brutally observant, she has never been without a point to make or an institution to bash.

Stories shared by her contemporaries, colleagues, fans, and critics — from Sonic Youth’s Thurston Moore to filmmaker Richard Kern — cement Lunch’s self-designated role as a fierce champion of the marginalized. They also make it clear (as does Lunch herself) that she’s a complicated person with intense needs. Proudly and enthusiastically sexual, Lunch has always taken what she wanted from men, both to fulfill her own desires and to get back at the ones who hurt her.

Yet, as some anecdotes reveal, she is also capable of care and kindness. In fact, it’s her very desire to speak for those who aren’t able to stand up for themselves that has led to some of her most envelope-pushing work over the decades. And she makes it quite clear that she will continue to push that envelope as long as she’s able to find a microphone to amplify her singular voice. — Betsy Bozdech

Marilyn Ferdinand With her new documentary, Lydia Lunch: The War Is Never Over, legendary underground filmmaker Beth B presents a retrospective of the career of her sometime collaborator, No Wave artist Lydia Lunch. Both women were part of the underground scene in New York City’s bombed-out environs of the 1970s, and both continue to share a fury at patriarchy and a desire to provoke audiences to elicit a response that can lead to deeper understanding and, ultimately, liberation. Beth B makes ample use of archival footage of Lunch in performance, starting with her first band, Teenage Jesus and the Jerks, through to the present. She also samples from the infamous film by underground filmmaker Richard Kern, The Right Side of My Brain, that explores Lunch’s sexual fantasies, which she has always put at the forefront of her artistry as a tool of empowerment. Lunch is frank about the sexual abuse she suffered at the hands of her father, a subject that comes up frequently in her spoken-word performances, and her need to go to extremes in order to feel anything at all. While anger may have kept her going, Lunch is quick to offer comfort and love to those in pain. Lydia Lunch: The War Is Never Over might frighten or disgust you, but if that happens, the film has done its job.

Pam Grady: The title is literal in this portrait of the turbulent artist who first appeared as on the New York scene during the punk/no wave era more than 40 years ago, appearing as the enraged adolescent front woman of the seminal band Teenage Jesus & The Jerks. A musician, writer, poet, actor, and performance artist, Lunch has spent a lifetime transforming, transcending, and distilling personal pain and early trauma into her work. Directed by Lunch’s longtime collaborator Beth B., the documentary offers a prismatic look at Lunch’s life and work, filled with four decades of archival performances leading up to the current era, as well as plenty of contemporary interviews with Lunch and her associates, so intimate at times that the film sometimes feels like watching a home movie.

Sherin Nicole
Punk has produced queens because its queens have made punk “rock.” Lydia Lunch forged the crown to go with her sword out of music, mania, and mastery of self. She’s an artist who knows women making noise are women being heard and The War Is Never Over proves her point is perennially sharp.

Loren King Director Beth B’s glowering portrait of the punk icon, Lydia Lunch The War is Never Over is, like its subject, unapologetic, raw, fierce and furious. For those who don’t know much about Lydia Lunch, who as a runaway teenager became a force in the 1970s New York City downtown scene with her “No Wave” band Teenage Jesus And The Jerks, this film is a great introduction. Lydia’s life and work — which are inextricable — come alive through archival performance footage, interviews with musicians and artists from the underground scene and with Lydia Lunch herself. At 60-something, she’s lost none of her eloquent, profane, ironic, nihilistic rage that has infused her spoken word performances, books, lectures and films for decades. She is adamantly not a victim, despite the sexual abuse that drove her from Rochester to Manhattan’s then-decrepit and dangerous Lower East Side as a young teen. Her revenge is homicide, she says, not suicide; one of many lacerating, provocative, brutal, no-holds-barred comments that make Lunch the one-of-a-kind fearless force that she is.

Leslie Combemale As documentaries go, it’s fairly safe and straightforward, until Beth B reveals the arc of Lunch’s story. Up until that point, “Why is Lydia Livid?” would have been a great name for it, but Beth B guides us through to the moment when we hear, from Lydia herself, the genesis of her rage. Her role as provocateur makes far more sense given that context, as does her drive to introduce others to their own inner demons. She knows firsthand monsters make other monsters. Read full review.

Jennifer Merin Lydia Lunch The War is Never Over is a well-played music biodoc about the iconic badass feminist punk rocker whose mission in life is to empower women to do and be what they want to do and be. Filmmaker Beth B, known for narrative and nonfiction films that twist in one way or another around sexuality, captures Lunch’s persona and story through an intimate and ongoing on camera interview that’s interrupted by clips of Lunch’s live performances and on camera commentaries by her punk peers, all of which establish the current sociopolitical climate and cultural milieu, Whether punk prophets push your buttons positively or not, you’re bound to be impressed by Lunch’s staunch can do stance and her relentless, unapologetic and persuasive message of female empowerment. Rock on, Lydia!

Sandie Angulo Chen: Whatever viewers might think of Lydia Lunch’s music, poetry, and films, it’s undeniable that she was a pioneering punk rocker and performance artist. Unapologetically feminist and sex-positive, Lydia was ahead of her time, and filmmaker/friend Beth B (also a veteran of the New York City punk scene) pays tribute to her with this honest and fascinating look at her four-decade career, art, and activism. Featuring interviews with fellow musicians, filmmakers, cultural critics, and artists, the movie elevates the voice of an artist who may not be a household name but who is remarkably erudite, poetic, and powerful.

Cate Marquis Lydia Lunch The War is Never Over spotlights punk musician/spoken word artist Lydia Lunch, a woman who took an abusive childhood and used it to craft a persona that embodies a self-possessed, brass feminist rebel. Lydia’s music is both punk and beyond punk, basically defying categorization, as she mixes politics, feminism, punk, goth and sex, in an original and unforgettable ways. Filmmaker Beth B builds her biopic around interview footage with Lydia, commentary from fellow musicians along with concert footage and other materials from a career that spanned from the late ’70s to the present, including collaborations with an array of artists. Watching Lydia perform in this entertaining biopic and gives the same kind of thrill as watching a John Waters movie, with a touch of Russ Meyer – a celebration of the rebel, the odd, the differ, and someone who is boldly herself.

Title: Lydia Lunch The War is Never Over