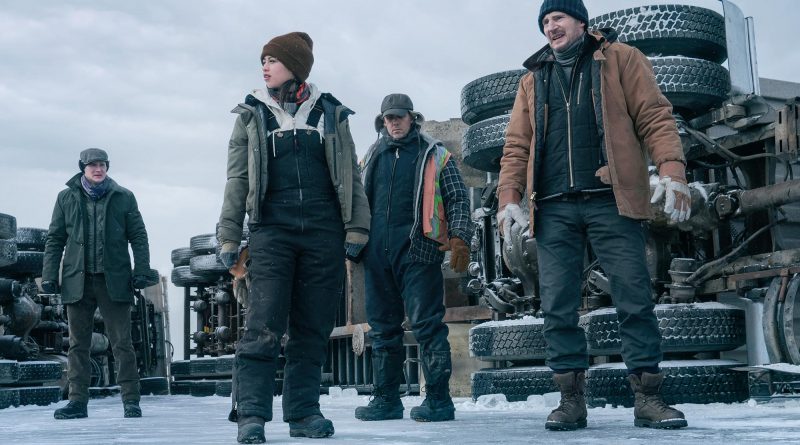 At age 69, grizzled Irish actor Liam Neeson (The Grey, Non-Stop, Cold Pursuit) has become one of Hollywood’s most steadfast leading men, accustomed to coping with catastrophic situations. This time, he’s a rugged, long-haul trucker based in North Dakota.

When there’s a sudden explosion of methane gas, hapless diamond miners are trapped deep below the surface in remote Manitoba, knowing that their oxygen will soon run out.

Mike McCann (Neeson) and his younger brother Gurty (Marcus Thomas), a skilled mechanic who suffers from P.T.S.D. & aphasia as the result of a war injury in Iraq, are summoned by trucker Jim Goldenrod (Laurence Fishburne) to transport rescue drilling equipment – 30-ton gas wellheads – across northern Canada’s treacherous terrain during the spring thaw when ‘ice roads’ are normally closed.

As part of a convoy of three 18-wheelers, they’re joined by feisty Tantoo (Amber Midthunder), an Indigenous Canadian woman whose brother is among the trapped miners, along with sleazy Vernay (Benjamin Walker), an insurance claims adjuster from corporate headquarters.

As they proceed along the only route that will allow them to reach the mine in time, they encounter cracks in the rapidly melting ice, pressure waves, storms, avalanches and deceptions as they fight for traction.

Taking his cue from the success of the History Channel’s Ice Road Truckers, screenwriter/director Jonathan Hensleigh (Kill the Irishman) has fashioned a formulaic action-thriller, populated by predictably clichéd characters…although I did learn the reason why truckers keep bobbleheads on their dashboards.

And if the concept feels familiar, perhaps you’re recalling Henri Georges Clouzot’s classic 1953 French thriller The Wages of Fear, based on a novel by George Arnaud, about trucks carrying explosive nitroglycerine through the mountains; in 1977, it was remade by William Friedkin as Sorcerer.

On the Granger Gauge of 1 to 10, The Ice Road is a scary, intense 6, streaming on Netflix.