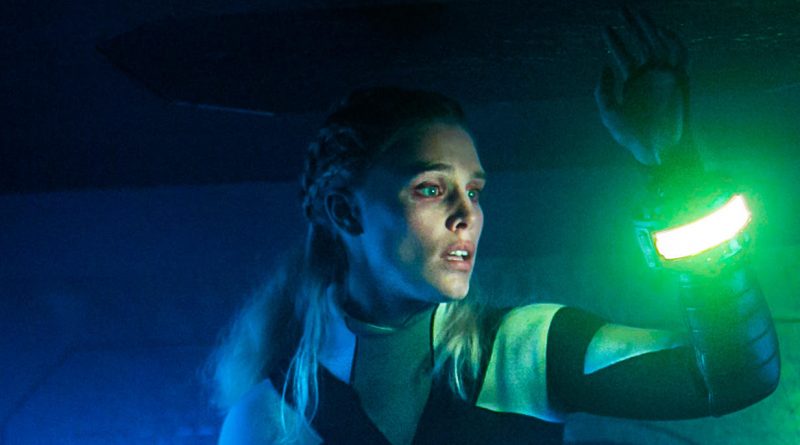 Comparisons to 1997’s Cube and its sequels are inevitable. The first film earned its notoriety by giving claustrophobic viewers nightmares and everyone else bragging rights for not squirming long after the credits rolled and Meander operates by the same playbook.

On a lonely stretch of chilly back road, drawn, taciturn Lisa (Gaia Weiss) hitches a ride in handsome Adam’s (Peter Franzen) truck. The inevitable small talk bypasses banal and goes directly to awkward: Adam’s question about children prompts Lisa’s grim admission that she has…had a daughter–today would have been her ninth birthday–and the thing she wants most in the world is to see her little girl again. Not to die, she quickly adds, presumably aware that both her demeanor (dour and drabbed down) and behavior (she’s old enough to know that getting into a vehicle with a stranger–especially a man–is a high-stakes gamble) belie her words. The cross-shaped tattoo on Adam’s left hand takes on alarming significance when the radio crackles that a man fitting his description–tattoo and brown truck included–is wanted in connection with two murders. Cue screeching brakes and a shock cut.

Lisa awakens in a small room… but it’s the farthest thing from a bog-standard serial killer’s basement holding cell one could imagine: All sleek surfaces striped with multiple rows of neatly arranged lights and an iris-opening portal–closed, of course. She’s dressed in some kind of fancy black, white and grey catsuit, her hair is neatly plaited into four braids and there’s a wide glowing bracelet–a countdown clock–around her left wrist. So yes, still a nightmare, but an impressive fancy, high-tech one.

Has some wealthy someone (high-tech mazes don’t come cheap) decided for some perverse reason to test the relative conviction of Lisa’s contradictory assertions–desire not to die vs. desire to see her dead daughter? Apparently so, because Meander’s plot is built around a series of challenges to which Lisa must rise, most of which are guaranteed to make some segment of the viewing audience deeply uncomfortable, starting with those who have nightmares about drowning, burning, being crushed or suffocating in tight spaces. Which is to say that at heart it strongly recalls Vincente Natali’s 1997 Cube, which drops six strangers into a similar game of beat-the-cruel-booby trap; in fact, Cube’s poster art–narrow corridor, light-striped walls, lone figure emerging through a small opening–could easily be tweaked to work for Meander.

But Meander is more visceral from the outset: Instead of a group of mice in a cruel maze, there’s just Lisa. It quickly becomes clear that she isn’t the first, but she’s the only and Weiss is a capable heroine trapped in a nightmarish game of someone else’s devising, one that taps into primal feats of darkness, suffocation, too-tight deadlines and spaces and too little information. And however perversely straightforward rules of the game seem to be, writer and director Mathieu Turi has built in some nasty surprises that keep Meander from becoming tediously repetitive–just consistently dark.