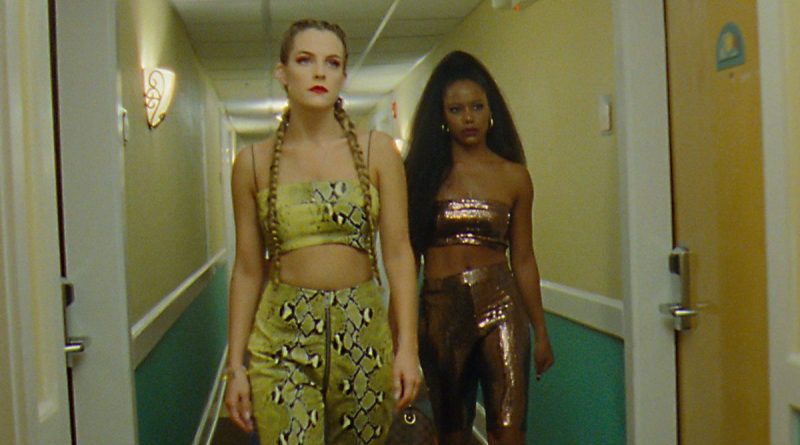 A stripper gets more than she bargained for in Zola, a bawdy road trip about sex work, female friendship and the messy world of men.

This is ostensibly a comedy, but there’s a dark side to it all that makes Zola a real innocence-to-experience trip, most of that captured through the performance of Taylour Paige in the title role.

To put the best possible light on things, it’s a great yarn about storytelling.

Zola is based on a 148-tweet thread from A’Ziah King in 2015 that lit up social media at the time.

King’s tweets tell a tale about 48 hours of chaos that start with a trip to Florida to do a little pole-dancing and end with criminals, trafficking and way too many guns.

Director Janicza Bravo also co-wrote the screenplay, and she and Jeremy O. Harris pretty much capture the unique voice that comes through in the original twitter thread.

Zola (Taylour Paige) works in a Detroit restaurant and meets Stefani (Riley Keough) when she waits on her table. The two women immediately bond like sisters, a bit of girl magic conveyed with the help of sparkly fairy tale sounds and other audio brilliance; Mica Levi’s score is a huge part of the storytelling.

The new BFFs decide that a road trip to Tampa is in order. According to Stefani, they’ll make tons of money dancing in clubs.

Zola explains that she just has to get past her boyfriend’s objections, which involves having to “fuck him calm,” which she does, the first of many shagging scenes that leave men looking like pushovers for pussy — to borrow from the parlance of the film.

Along for the ride to Tampa are Stefani’s gormless boyfriend Derek (Nicholas Braun) and her buddy X (Colman Domingo) who is driving and proves to be far more complicated than he appears.

After a lacklustre round of dancing in one Tampa club, Zola discovers that Stefani and the mysterious guy X have plans to swap dancing for prostitution.

That doesn’t fly with Zola, and she says so; X is suddenly transformed from benign driver to wildly menacing character. Between his threats and Stefani’s tears, Zola agrees to stick around to keep an eye on Stefani while she turns tricks. Sort of literally.

What follows is a rapid succession of unremarkable men and their penises and their cash, a buffet of banal that is both comical and painful to watch.

Zola is bodyguard and cashier while Stefani works, calmly vetting the men and upping the prices. She’s a better pimp than X, as it turns out, and there’s a shift in the power dynamic. But not much of a shift.

The next night, Zola escorts Stefani on her rounds, but things take a violent turn. The action isn’t so funny anymore, and the vague sense of comic fantasy pervading everything vanishes.

Zola seems to be about a woman who can hold her own in a room full of crazies, but under the comedic take is a clammy story of people using one another in unpleasant ways. A’Ziah King was 19 when she had the real-life adventure the movie is based on; maybe she played up the humour as a way to bring dark details into the light.

Zola is quick and funny and entertaining for the most part, but if there’s a message here, it is elusive.

What do we need men for? as E Jean Carroll put it. What indeed.