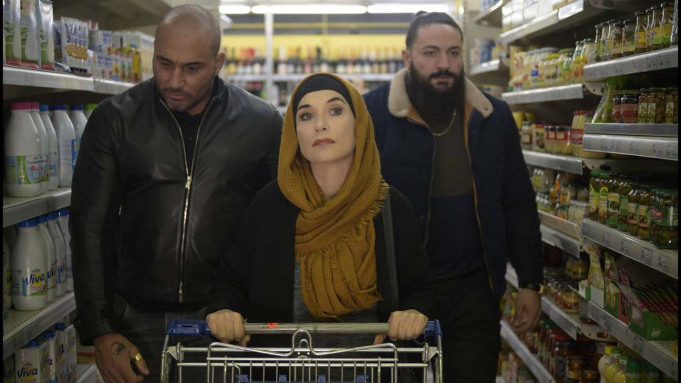 It’s a true cinematic sin that for a career that spans five decades and with more than 120 films on her resume, French film legend Isabelle Huppert finally earned her first lead actress Oscar nomination for her darkly clever performance in Paul Verhoven’s 2016 thriller Elle. As she has shown multiple times on the big screen, she revels in taboo-breaking bravado and potentially off-putting characters that she brings to colorful life with cold-blooded panache. That includes her real-life teen charged with patricide in 1978’s Violette Noziere, a homicidal postal worker in 1995’s La Ceremonie and a music instructor with a taste for kinky sex in 2001’s The Piano Teacher.

While her widow and mother of two grown daughters in her latest film Mama Weed doesn’t quite compare with her most audacious roles mentioned above, at least Huppert’s character bears the tantalizing name Patience Portefeux. She works as a French-Arabic translator for the Paris police who interprets the communications between the city’s most notorious drug dealers. At night, she visits her sickly mother at an elder-care facility while trying to avoid the fact she is behind in her payments.

But when she recognizes the voice of the son of a nurse tending to her mom, she tries to protect him. That leads to Patience suddenly finding a huge stash of Moroccan hash worth a considerable amount of Euros. With her newly adopted K-9 dog and a pair of Arab flunkies who are willing to sell the drugs to others, she suddenly has found a way to pay off her debts. That includes her cagey Asian landlady, who has no problem with helping to launder her ill-gotten gains. In order to protect her identity in public, Patience disguises herself in fancy makeshift hijab-like garb, Hermes scarves and big sunglasses. But her turn to crime doesn’t come out of the blue since her late husband was tied to an international trafficking operation and her mom had her hand in some illegal activities.

I wish that director and co-writer Jean-Paul Salome injected some more snap and humor into the proceedings, generally a staple for this kind of caper. Just having Patience bopping along to a rap tune in her car after scoring a victory while a fellow driver joins her is a cliché that brings little to the table. What saves Mama Weed is Mama Weed herself. At age 68, the sight of the still-glorious Huppert onscreen being as intriguing as ever will give you a contact high that lasts a good long time.