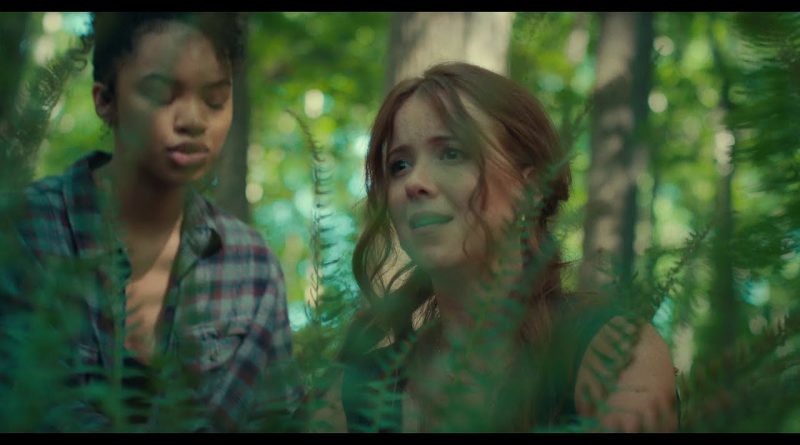 What seems to be a character study in a young woman grieving her mother’s death takes a hard right into sci-fi in River, a drama with unfortunately more ambition than a satisfying resolution.

After a year in Los Angeles, twentysomething River (Mary Cameron Rogers) returns home to North Carolina to deal with her mother’s apparent suicide. Her mom (Becki Hayes, Life Between the Reins) was full of encouragement but also weighty statements that wistful moms tend to say, such as, “I just want you to live a full life. Don’t be like me.”

River’s childhood best friend Amanda (Alexandra Rose) and Amanda’s brother, Jamie (Rob Marshall), River’s onetime boyfriend, help her pack up her mother’s belongings and lend emotional support. Yet when River begins disappearing after walks in the woods and forgetting where she’s been, Jamie seems way more concerned than Amanda. Come to think of it, his younger sister isn’t quite acting like herself, either.

Making her feature debut, writer-director Emily Skye expanded River from an award-winning short, but the story is a slow burn before it reaches any significant plot twist. Some of this might be because of budget constraints; flickering lights cue eerie moments, and in an economy of characters, River’s employer at a country store (Courtney Gains, Back to the Future, Corbin Nash) also is her therapist.

Yet even in the quiet moments, River fails to build much suspense. The first inklings of sci-fi turn up about halfway through the film’s running time, which for some viewers might be too little too late.

As River, Rogers (Under the Silver Lake) is sympathetic and seems game for what’s ahead, but the script has little subtext. It gives River a lot of scenes with repetitive dialogue and a voiceover that’s at times unnecessary.

Marshall is effective as an ex-love dancing around the feelings that he still has for River, but Rose has a lot to carry as both the best friend and an enigma who knows River’s secret. Skye no doubt loves River, but this iteration of her story winds up lost in the woods.