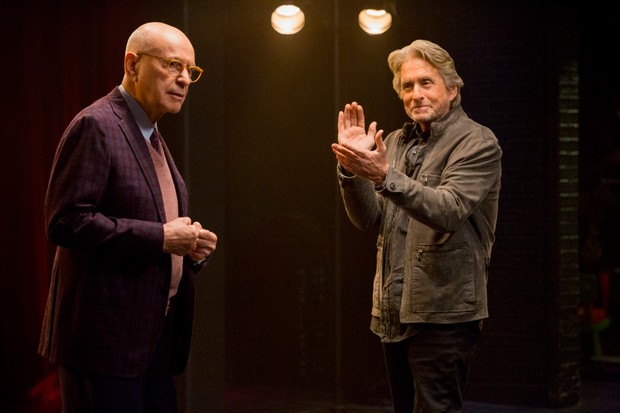 Created by Chuck Lorre (Two and a Half Men, The Big Bang Theory, Young Sheldon), this comedy/drama series made its Netflix debut in 2018, starring Michael Douglas as Sandy Kominsky, an imperious Hollywood acting coach whose promising career as a performer never panned out, and Alan Arkin as Norman Newlander, Sandy’s longtime agent and only friend.

This third – and final – season finds Sandy mourning the death of his friend Norman and serving as Executor of Norman’s estate. Drinks and dinner at their favorite hangout, Musso and Frank’s, will never be the same.

“We are passengers on boats, slowly sinking,” Sandy declares.

There’s an inevitable sadness, even though life still goes on. While trying to adjust to life without his closest confidante, grumpy Sandy must also come to grips with the complicated inevitability of Mindy’s marriage to much-older Martin.

Their upcoming nuptials signal the arrival of raunchy Roz, as Douglas and Turner reignite their Romancing the Stone and Jewel of the Nile charisma. Plus there are amusing encounters with Morgan Freeman and Barry Levinson, as themselves.

Silver-haired Michael Douglas has always had an effective knack for self-deprecation; his Sandy is absurdly vain yet acutely self-aware. And Alan Arkin is renowned for his impeccable comic timing.

If you’re streaming all three seasons, you’ll glimpse memorable appearances by Danny DeVito, as a proctologist; Jane Seymour, as a flame from Norman’s past; Ann-Margret, as Norman’s friend; Nancy Travis, as a divorcee who takes acting lessons from Sandy; and Lisa Edelstein as Norman’s estranged daughter.

There’s lots of laughter – fun and sentimental – amid the pathos, which the cast is obviously enjoying. Sadly, the condensed six-episode season left me wanting more, yet knowing this is the final chapter.

On the Granger Gauge of 1 to 10, The Kominsky Method bows out with a bittersweet 8, streaming on Netflix.