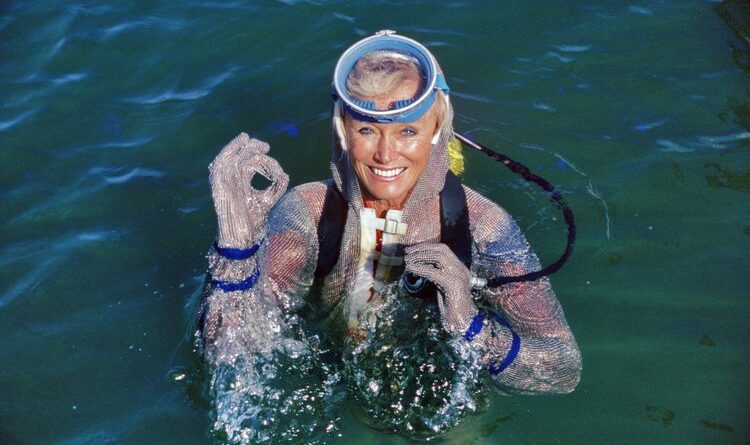 If you are in need of inspiration of the fierce, feisty and fearless female kind, you can’t do better than this semi-deep dive into the life of Valerie May Taylor as revealed in the documentary Playing With Sharks. This world-renowned marine conservationist and deep-sea diver is basically in the same league as gorilla protector Dian Fossey and chimp savior Jane Goodall. Only her realm is truly many leagues below the Earth’s surface where her fishy playmates lurk in the form of sharks.

This Aussie native’s trajectory has been largely informed by her love of deep-sea diving and its toothy inhabitants, but her lifelong drive and determination might have first been born when she forced herself to learn how to walk again after contracting polio as a young girl. When she seriously started to hunt sea life and deep-sea dive in the ‘50s and ‘60s, she was a rare woman who became a world-class spear-fisher and diver.

With her dazzling blue eyes, blonde ponytail tied in a red ribbon (in honor of the blood that surrounded sharks as they ate their fishy prey), and willowy figure, Taylor was a knockout. I would believe given the era that she might have inspired Bond girl Ursula Andress as she slinkily rose from the sea in Dr. No. Taylor, who is 85, remains a striking woman who can still fit into her snug hot-pink diving suit.

The doc also is part love story as it details how she met her deep-diving male counterpart and future mate in Ron Taylor, a photographer who similarly was intrigued by sharks. However, at a certain point, his wife had misgivings about her reputation as a sub-aquatic hunter. She says, “I only killed one shark,” a Great White, while setting a record for the biggest such creature caught by a woman. “I wish I hadn’t. But there was so much life in the ocean then, you thought you couldn’t make a dent.” By 1965, the couple decided the only shooting they would do was with their cameras.

That led to a new vocation as filmmakers and underwater movie consultants. Here is where matters grow murky, however. They were recruited by writer Peter Benchley and Steven Spielberg to participate in the making of 1975’s Jaws. Their mea culpa? They had no idea that the film would become the first modern-day blockbuster in movie history. However, they clearly could see on the set that the ginormous man-eating beast was being demonized into every beachcomber’s worst nightmare. Her excuse? “You don’t walk around New York worrying about King Kong.”

She got more serious about protecting the species such as smaller gray sharks, whose fins were butchered to make shark fin soup in China, by reaching out to politicians to restrict the killing of such ocean life. At least this doc does sets the record straight as we watch Taylor playfully engage her pals as they swirl around her and eagerly feed on the fish she dangles before them. Now a widow after her husband died from leukemia in 2012, she takes a sentimental journey back to Fiji in order to play with her buoyant buddies one more time. She might have trouble getting her sore arm into her pink diving suit these days, but under the sea she is happy as a clam, especially when she giddily divulges, “One of them hit me!”

EDITOR’S NOTE:Playing With Sharks: The Valerie Taylor Story is AWFJ’s Movie of the Week for July 23, 2021.