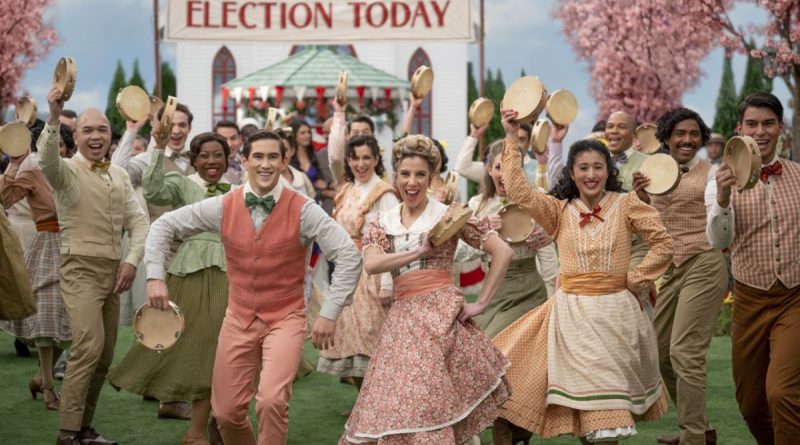 Schmigadoon, the hilarious parody on Apple TV+, is aimed at those of us who adore musical comedy.

Created by Den Kaurio and Cinco Paul, the team behind the Despicable Me franchise, it’s introduced by a bickering young couple: Melissa (Cecily Strong) and Josh (Keegan-Michael Key). They’re physicians who hope to re-spark their romance by embarking on a ‘relationship retreat,’ featuring a backpacking trip deep into the woods.

Suddenly and inexplicably, they find themselves trapped in a whimsical, candy-colored realm – a magical town called Schmigadoon – inhabited by jubilant singers and dancers.

A lusty farmer’s daughter (Dove Cameron) flirts with Josh, while a sullen carnival worker (Aaron Tveit), who operates the Tunnel of Love, is smitten with Melissa.

Delighted Melissa is eager to sing along, but dour Josh is not. “You know how much I hate musicals,” he complains. “People don’t just burst into song in real life.”

But they can’t leave – according to the local leprechaun (Martin Short) – until they find true love.

If you’re a musical comedy fan, you’ll recognize references to Brigadoon, Carousel and Oklahoma! Plus allusions to Finian’s Rainbow, Seven Brides for Seven Brothers, Annie Get Your Gun, The Music Man, South Pacific, The Sound of Music, and The King and I…the cream of the ‘40s & ‘50s crop.

On the Granger Gauge of 1 to 10, Schmigadoon! is a satirical 8 – a six-episode summer trifle on Apple TV+.