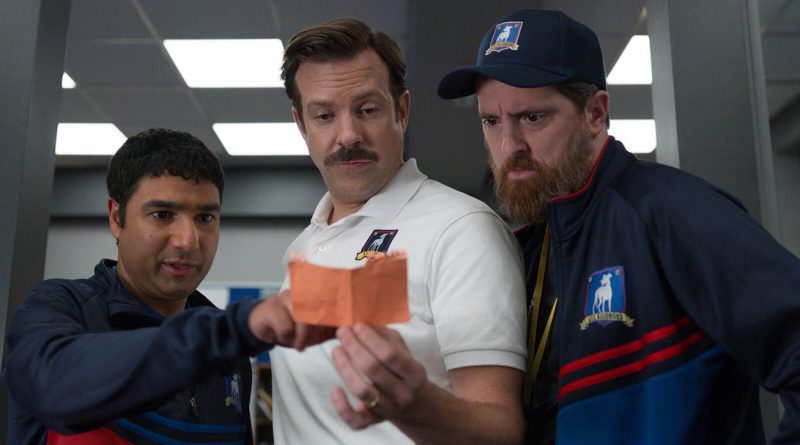 This delightful, culture-clash comedy just scored a massive 20 Emmy nominations, the most ever for a 1st season sitcom – with accolades going to its star Jason Sudeikis, along with co-stars Hannah Waddington, Juno Temple and Brett Goldstein.

Created by showrunner Bill Lawrence (Scrubs, Cougartown) with Jason Sudeikis, it premiered during the summer of 2020, when the world was in the midst of a global pandemic. The plot revolves around an unflappable American football coach named Ted Lasso (Sudeikis).

When he’s summoned to London to coach a Premier League soccer team, he’s purposely set up to fail in every possible way. Although no one appreciates him, particularly brittle Rebecca (Hannah Waddington), the club’s icy owner, genial Ted responds with consideration and kindness, repeating, “I appreciate you,” over and over again.

His unflinching optimism and aggressive enthusiasm prove contagious, even to the gruff-but-tender-hearted AFC Richmond captain Roy Kent (Brett Goldstein), who is also one of the script writers.

Skillfully blending the fish-out-of-water concept with workplace humor in a sports genre, the feel-good appeal of Ted Lasso is almost irresistible – despite the fact that two of the primary characters are enduring difficult divorces and one of the team’s star players realizes that his aging body cannot keep up with the demands of professional soccer.

“Women are such extraordinary creatures, and we don’t have to be competitive,” notes Ms. Temple. “I think the show showing that is one of the things I’m proudest of being a part of, actually.”

And if the strategy of having Rebecca deliberately trying to sabotage Ted Lasso feels eerily familiar, yes, it’s somewhat similar to Major League (1989).

On the Granger Gauge of 1 to 10, Ted Lasso is a terrific 10 – and the second season begins on Friday, July 23, on Apple TV+ with 12 half-hour episodes released weekly on the streaming service.