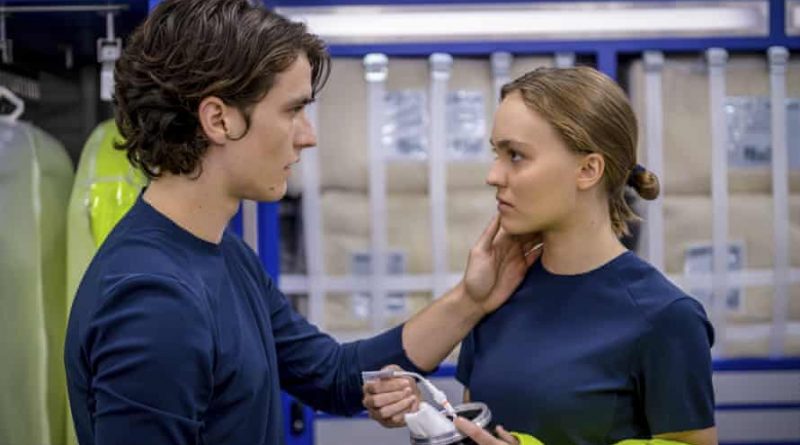 Prolific Neil Burger (Divergent, Limitless) wrote and directed this YA sci-fi thriller that imagines a dystopian future in 2063, when Earthlings only hope for the survival of the human species is to colonize a hospitable planet located in a faraway galaxy.

It will take 86 years for a crew to go that distance, so 30 test-tube-conceived youngsters are dispatched on a mission during which they’ll reproduce so their grandchildren can settle Earth’s new colony.

Serving as a caring father-figure, sad-eyed Richard (Colin Farrell) is responsible for teaching and training them in their daily tasks in this sterile environment.

10 years pass and adolescence looms. Scientists have anticipated their hormonal changes so – to keep the teens docile and obedient – they drink a Dixie cup of blue liquid, which is actually a drug to quash their volatile emotions and rampant libidos.

But when curious Christopher (Tye Sheridan) discovers the existence of the suppressant and, along with his buddy Zac (Fionn Whitehead), they refuse to drink The Blue. Immediately, their testosterone levels surge, much to the dismay of the chief medical officer Sela (Lily-Rose Depp, Johnny’s daughter).

When Richard sees their unwanted sexual advances toward Sela, he reminds them of the rules. But they’ve already accumulated a number of followers who also refuse their meds.

Predictably, an external transmitter breaks, so Richard, accompanied by virtuous Christopher, ventures outside the spacecraft to make repairs. An accident occurs, accompanied by mysterious sounds that could indicate the menacing presence of an alien.

Inevitably, the astronaut cadets break up into two camps – with the rebels following malevolent, maniacal Zac. Then when they discover a sealed pod loaded with weapons, anarchy prevails.

Neil Burger has come up with an intriguing parable – adapting and updating William Golding’s “Lord of the Flies” to teenagers in outer space – but the superficial characters are hopelessly stereotypical, chasing each other down long, antiseptic corridors, chronicled by Chilean cinematographer Enrique Chediak.

On the Granger Gauge of 1 to 10, Voyagers is a frenzied 5, streaming on Prime Video, Vudu and Fandango NOW.