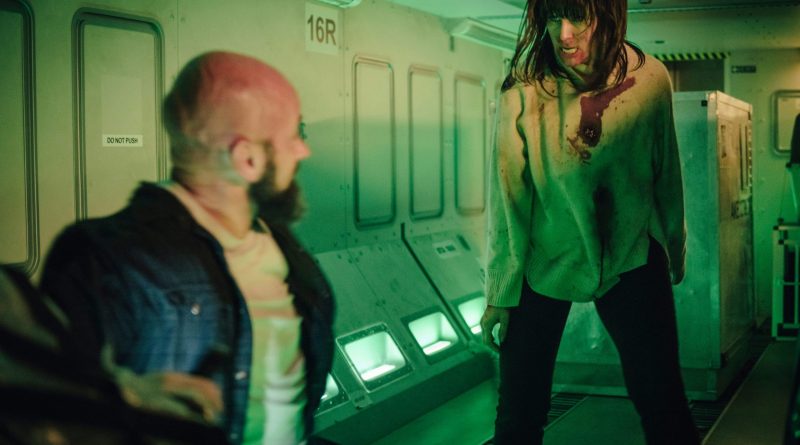 So, here’s the high-concept pitch: Imagine Snakes on a Plane, only instead of snakes, the lethal pests are vampires and Samuel L. Jackson isn’t on board to declare, “I have had it with these motherfucking vampires on this motherfucking plane!” The surprise is that, unlike many movies whose bold strokes trump attention to detail, Blood Red Sky is both pretty bloody entertaining and surprisingly emotionally satisfying.

Directed by Peter Thorwarth, who co-wrote the hits-the-ground running screenplay with Stefan Holtz, Blood Red Sky opens as TransAtlantic flight 473, which originated in Germany and was bound for New York is brought in for an emergency landing at an RAF base in Scotland, with full emergency services waiting on the ground and no-nonsense Colonel Alan Drummond (Graham McTavish) in command. They’re prepared for the worst, especially when they see a Middle-Eastern looking fellow in the cockpit. And what’s with the small boy who emerges from the cargo bay clutching a teddy bear? That’s what policewoman Naomi is trying to gently elicit from little Elias (Carl Anton Koch), who was travelling to New York with his mother. And he has quite a tale to tell.

The gist is pretty straightforward: Flight 473’s passenger list is a smorgasbord of stories crammed into a metal tube–older couples, young lovers, families, loners and terrorists–no, not Farid (Kais Setti), who has the misfortune to look like the sort of middle-eastern bogeyman who plants bombs on planes in the name of Allah but is actually a nice young scientist en route to a professional conference. He strikes up a friendly conversation in the terminal with young Elias, whose mom, Nadja (Peri Baumeister) has an appointment with an American specialist in blood disorders. Elias is quite articulate on the subject, impressing Farid with his guileless composure while mom Nadja, pale and bald beneath her high-end wig, is in the bathroom giving herself an injection–her personal medical kit having been politely cleared by security–to control her condition… the kind of condition that used to bring out the angry villagers with crosses and wooden stakes.

Once the plane starts boarding, we’re introduced to the stewards–attractive, professional and thoroughly up to date on their co-workers’ personal lives–the pilot, and the mass of passengers settling in for their eight-hour flight with blankets, safety-information cards, in-flight entertainment and dim lighting, the better by which to catch some sleep. Plus four hijackers, who range from no-nonsense ringleader Berg (Dominic Purcell) to skinny psycho Eightball (Alexander Scheer), who spends much of the film covered in blood and vibrating with Klaus Kinski-level crazy. Sure, you could question how they managed to get quite so much lethal gear aboard the plane–even if it’s in the cargo hold–in an age of serious security on commercial flights, but Blood Red Sky both ramps up fast and furious and relies on the fact that anyone who’s flown in the last half-century knows that at best, commercial air travel short of first class/deluxe is something to be endured rather than enjoyed. And at worst, well, the sky really is the limit: hijackers, vampires, venomous snakes, impromptu karaoke, werewolves and screaming baby jamborees.

But for all the broad strokes–many of them crimson–Blood Red Sky balances the escalating tension with eerily cool flashbacks that fill in Nadja’s dark back story and ground her ferocity in both maternal devotion and a certain simmering rage at life’s fundamental unfairness. And a tip of the hat to veteran film and theater actress Adriana Altaras, who takes the small, 11th-hour role of Dr. Migiakis–a mature passenger who steps in when serious medical assistance is needed–and delivers a lovely miniature portrait of a brisk, professional competence amidst utter, lunatic chaos.