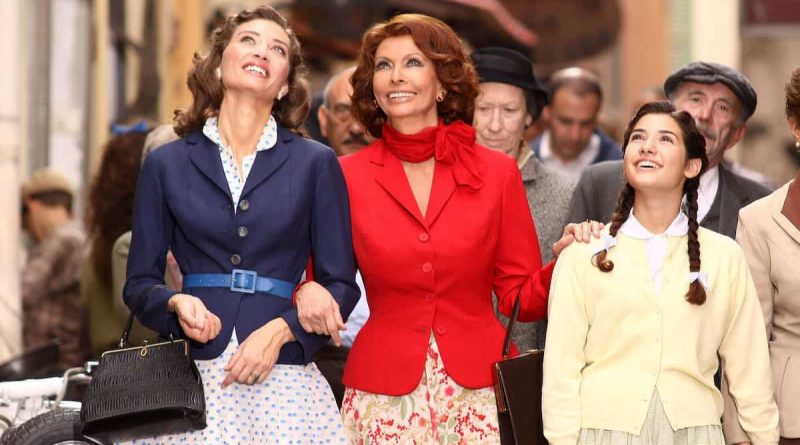 Rags to riches stories with a side of betrayal never whetted the appetite for a big hearty meal like My House is Full of Mirrors does. Like a bowl of endless pappardelle smothered in a tasty ragu, screen legend Sophia Loren stars in the lengthy and satisfying two-part miniseries, playing her own mother, Romilda Villani. It’s an inside glimpse of Loren’s family life based on her sister Maria’s (born Maricuella) eponymous memoir.

Meet the Italian tiger mom, Romilda Villani, a Greta Garbo look-alike beauty herself, denied the chance to go to Hollywood because her parents forbid it. Her pent-up passion for being famous is slowly transferred to older daughter Sophia, who is undeniably beautiful. They are post-WW II dirt poor and living in a small town outside of old Napoli. But they’re rich in their familial homestead, replete with a loving nonna and nonno and Romilda’s unmarried sister, Dora. Romilda has returned home after her lover Ricardo left her with two children and no promise of a wedding.

Maria Scicolone’s biopic of her family includes Sophia and Romilda, has English captions, and is based on a 2004 autobiography. Maria’s life is more of a focus in the second half, but her trauma as the unwanted daughter of Ricardo Scicolone is present throughout the film. There’s no denying that the acting in this film is molto Italiano. A lot of gesticulating, facial gyrations, and “ehs” abound. It is filmed in throwback visual style, too; the cinematography makes you feel as if you are watching a 1966 flick. Still, the classic story of a woman wronged and her revenge ploy, replete with hard work and perseverance netting tangible fame and fortune, is captivating. And like any well-done soap opera, it will have you hooked.

It boasts a tour de force by Loren, age 75 when the film was made, playing her mother with the vitality and life force of a woman half her age. Stunner Margareth Madè plays the role of the younger Sophia and captures the angles and the exotic lure that Loren aced in an era of Hollywood a bit weary of blonde bombshells like Grable, Monroe, and Mansfield. Even American popular culture in the mid-sixties was awash in Italian pop songs sung by Rosemary Clooney, Dean Martin, and Frankie Valli. Loren’s striking presence instantly enamored America, and her Oscar win for the film Two Women in 1962 propelled her to A-lister fame. Italy was never prouder.

The film is a circular story. The poverty of the hometown of Pozzuoli leads to Cinecittà in Rome. Cinecittà! The Hollywood of Italy was where Loren made her mark with her mother closely supervising. Eventually, all roads lead not to Rome but back to Pozzuoli in the end. The heel in this biopic is Sophia and Maria’s father, the shiftless and suave Riccardo Scicolone. His denial of Maria’s paternity (Gilda Lapardhaja played the young Maria) bore a shameful mark on the Villani family. These were times when illegitimacy was a big deal.

As Sophia grew up, Romilda decided to take their chances in Rome and bid farewell to Pozzuoli and her familial perch. The 1951 Miss Italia Contest was the first indicator of Sophia’s beauty, and at the age of 14, she caught the eye of producer Carlo Ponti, twenty years her senior. Never mind that he was married, this film does not delve into the messy newsmaking headlines of the scandal and the chatter of their long romance. It is Ponti who shepherded Sophia to Hollywood and built her to superstar status.

The miniseries is also a portrait of Maria, living in her sister’s shadow and with the denial of her father’s affections. Eventually, Maria Scicolone falls for Romano Mussolini, a jazz musician and one of five sons of Il Duce. She married him in 1962, the same year her sister won the Oscar, but he betrayed her and gave her heartbreak right out of the gate.

Yet, despite his philandering, Maria makes peace with Romano. Maria also furthers her education and grows closer to her estranged father, Ricardo Scicolone. Meanwhile, Romilda Villani is ensconced in a luxe apartment with a devoted butler and driver Franco. Still, loneliness forces her to yearn for the company of her family back in Pozzuoli.

Did I mention this story is nearly four hours long? So settle in with a big bowl of pasta, some Chianti, and be prepared to go on an emotional rollercoaster ride where the women, just like in Sophia’s Oscar-winning film, are the saviors and self-starters who prevail against bad men who underestimate them at every turn. Eh!