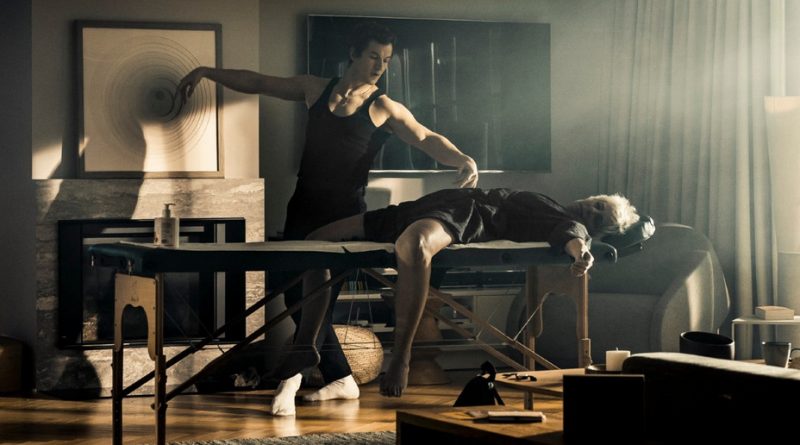 It’s hard not to hear Malvina Reynolds’ 1962 Little Boxes, a lilting critique of suburban despair amidst hollow prosperity, each time the camera sweeps across the unnamed, upscale Polish planned community filled with well-appointed, cookie-cutter houses in which Malgorzata Szumowska and Michal Englert’s dark fairy tale Never Gonna Snow Again is set. The houses are white, the meticulous grounds verdant and neatly landscaped and the residents are every kind of mess: Frustrated wives, nasty neighbors, distant husbands, rebellious teenagers and restless, overscheduled, quietly desperate children hard-put to imagine a world beyond their sterile, gated world, a pretty prison designed to stifle the restlessness, curiosity and, yes, the discontent and repressed resentment that, unleashed, can be the disaster that drives growth and change.

Enter Zhenia (Alec Utgoff), a Russian-speaking immigrant whom we first see emerging from a deep, dark fairy-tale wood and then bypassing the bureaucrat who’s about to deny him entry to Poland–along with the rest of the teeming crowd through which Zhenia quietly passes en route to the visa office. Zhenia gently lulls the bureaucrat into a hypnotic sleep, then quietly rubber stamps his own papers and is on his way.

A sweet-natured, destabilizing angel in a circus strongman’s body carrying a portable massage table and a small satchel, he quietly strolls into a gated community whose meticulously maintained grounds and well-kept houses seethe with unhappy people–frustrated housewives, distant husbands, restless adolescents, alienated teenagers, infirm and lonely older residents–most of whom have no real idea how their lives came to be in this state or how they might begin to change it. In Zhenia they find a quiet harbor, a man with strong hands and a gentle smile, someone who’s modest and undemanding, who reveals so little of himself that they can see in him whatever they want or need: A confidant, a sounding board, a lover whose gentle presence makes a stark contrast to his broad, smoothly muscular body, on display in a tight tank top and fitted sweatpants.

Szumowska and Englert’s slyly pretty fable–they co-produced and -wrote; he did additional duty as the film’s cinematographer–contains echoes of both TV’s 1967 brain-teaser The Prisoner–specifically, its primary location, a superficially idyllic village/prison and overall theme of insidious entrapment–and Pier Paolo Pasolini’s Teorema (1968), in which a similarly angelic-seeming interloper’s sexual healing frees the members of a miserable bourgeois household from their various repressions and discontents. But while Teorema’s catalytic stranger is a true enigma, Zhenia is merely a stranger, a man who keeps his sorrows close and his personal relationships at genial distance. And while the eventual revelation of Zhenia’s origins is a powerful one, Utgoff’s performance is the film’s anchor. His broad-planed face, while not conventionally handsome, is strikingly expressive and several brief scenes of Zhenia alone, observing or exercising meditatively in his small apartment, lay the groundwork for the eventual revelation of where he came from and why he’s chosen a way of life that affords both physical intimacy and emotional distance. Which may sound as though Never Gonna Snow Again is heavy going… but it’s not. It’s slyly funny–no belly laughs, just an accumulation of weird and unexpected digressions (including one that involves composting–to say more would be unfair to the film’s careful accretion of Twin Peaks-caliber weirdness)–that offset the pervasive atmosphere of isolation, loneliness and slow suffocation by social conventions.