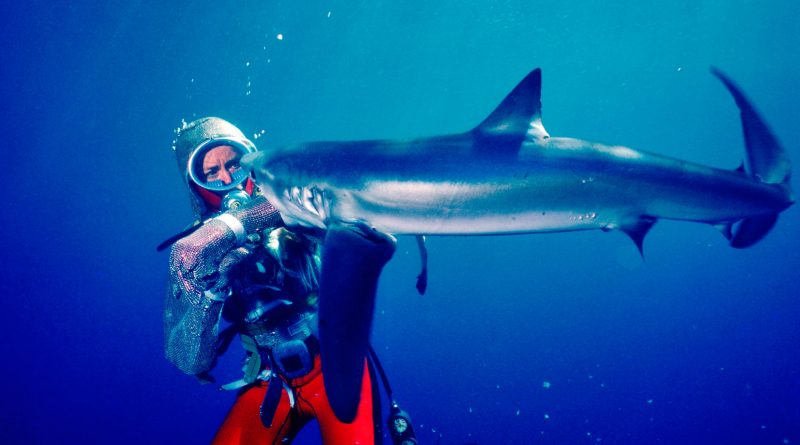 Valerie Taylor started diving with sharks back when, as archival footage reveals, it was considered droll to refer to her as a “mermaid” who was there to support and presumably fawn over the male divers. But based on what we learn of her in Sally Aitken’s entertaining documentary Playing with Sharks, it seems likely that if Taylor ever heard that description, she probably rolled her eyes and left the guys eating her bubbles. Not that Taylor disdains the idea of being feminine — indeed, with her signature pink wetsuit and bright hair ribbon, she’s leaned into her reputation as Australia’s most famous “girl diver” since she got her start in the 1950s. But, the film makes clear, she’s never been it to be anyone’s eye candy or cheerleader; Taylor has spent her life in the ocean because she loves it and wants to help others learn to love it, too. And that love has led to personal and professional fulfilment, landmark conservation efforts, and fame in and out of the water.

Working alongside her husband, Ron, from the early ’60s until his death in 2012, Taylor tirelessly documented the habits and habitats of Australia’s ocean creatures, especially sharks. Although she had been a champion spearfisher in her youth, Taylor grew to believe that sealife needed to be preserved rather than hunted — so, as she says in the film, she stopped shooting with a weapon and started shooting with a camera. The clips included here of their work are outstanding, especially when you consider that they were developing both the film and the safety gear they used as they went along.

The Taylors’ films, including Blue Water, White Death, were groundbreaking, and their experience with and knowledge of sharks helped inspire Jaws, both the book and the movie. While the Taylors only wanted to help the world better understand the sleek creatures that Valerie Taylor frequently compares to dogs, Steven Spielberg’s blockbuster didn’t exactly inspire feelings of love and protection in the average beachgoer. Perhaps because of her (unintentional) contribution to that sentiment, Taylor has been one of the world’s fiercest defenders of sharks and other ocean animals. Aitken ably captures that ferocity, still wrapped up in a bright pink wetsuit, and makes it very clear that Taylor has always been — and continues to be — a force to be reckoned with. — Betsy Bozdech

Susan Wloszczyna: If you are in need of inspiration of the fierce, feisty and fearless female kind, you can’t do better than this semi-deep dive into the life of Valerie May Taylor as revealed in the documentary Playing With Sharks. This world-renowned marine conservationist and deep-sea diver is basically in the same league as gorilla protector Dian Fossey and chimp savior Jane Goodall. Only her realm is truly many leagues below the Earth’s surface where her fishy playmates lurk in the form of sharks. Read full review.

Loren King If underwater photographer, filmmaker and conservationist Valerie May Taylor didn’t exist, the movies would have to invent her. Lucky for us she does, and Sally Aitken’s revelatory and fascinating documentary Playing With Sharks: The Valerie Taylor Story gives Taylor, now a spry 85, her well-deserved due. Read full review.

Leslie Combemale “Every dive has the potential to be a great adventure.” So says Playing With Sharks subject Valerie Taylor, conservationist, photographer, and inaugural member of the Diving Hall of Fame. Taylor is a household name and cultural icon in Australia, and clearly documentarian Sally Aiken rightly thought it was high time more of the world knew Taylor and her influence. Known as ‘Give it a Go Valerie’ when she was diving onscreen during the 1960s, now in her mid-80s she is still diving in the same brightly colored wetsuits. She has had an enormous impact on saving endangered shark species, and protecting the Great Barrier Reef. Taylor is an inspiration, as is Aiken’s documentary, which animal lovers and fans of powerful women will enjoy from beginning to end.

Pam Grady: As a young woman, Valerie Taylor was a rare species: a female spearfisherman. From that start, she evolved into a globe-trotting scuba diver and filmmaker in partnership with her husband, Ron – the two of them were responsible for the underwater shark footage in Steven Spielberg’s classic Jaws. More crucially, her experiences turned Taylor into a fierce advocate for sharks. What others fear, she embraces. Making prodigious use of Ron Taylor archival cinematography along with all-new material, director Sally Aitken takes the measure of this fascinating woman’s life and allows her to speak for the species she so admires. Friends and colleagues also appear to offer their observation on Taylor’s adventures and lifetime of advocacy. But it is Valerie who holds the viewer’s attention, a striking figure in her hot pink wetsuit and still joyful in her 80s, particularly when she visits where she is most at home – under the sea surrounded by sharks.

Nell Minow: I can’t remember the last time a movie made me change my mind about something as quickly and decisively as this one. I can’t say I am ready to go swimming with the sharks like Valerie Taylor, but I am now Team Shark when it comes to preservation and support. And I am big-time Team Valerie when it comes to living a joy-filled life of passionate curiosity and whole-hearted love.

Jennifer Merin Playing With Sharks: The Valerie Taylor Story is Aussie filmmaker Sally Aitkin’s compelling documentary about the life, career and mission of the Valerie Taylor, the famous Aussie deep sea diver who is campaigning to correct public perceptions about sharks (post Jaws, they’re considered to be mindless killing machines) and save them from impending extinction. It’s also noteworthy that the one and only Valerie Taylor, at 85 years young, is still stunning in her stand out shocking pink wet suit and still diving strong. There’s not a frame of ageism in this entertaining documentary. Get ready, get set, dive deep with super active activist Valerie to be inspired — and to learn to rethink sharks as playful sea puppies that fetch fish instead of frisbees. Well, maybe that’s a bit of an exaggeration, but apparently dogs are responsible for many more people bites than sharks are. Judge for yourself!

Sandie Angulo Chen: In Playing With Sharks: The Valerie Taylor Story, Australian director Sally Aitken chronicles the fascinating story of Aussie diver-underwater photographer-conservationist Valerie Taylor, who dedicated her adult life to educating others about the importance of saving sharks and demonstrating that they’re not the man-eaters they’re depicted as in pop culture (particularly after the movie Jaws, on which she and her husband served as consultants, convinced audiences that sharks are always killers). Aitken lovingly tells Taylor’s story as a pioneer in the world of underwater photography and as a remarkable activist.

Cate Marquis
So who plays with sharks?? Well, Valerie Taylor does, and has for many years. In fact, she compares sharks to dogs. Not your typical reaction. Valerie is a kind of shark pioneer. She and her husband Ron were the first to shoot underwater shark footage, and it is very like you have seen some of that photography – in the movie Jaws. Valerie and Ron began as champion spear-fishers but became champions for shark conservation. Are you hooked? I sure was watching Aussie filmmaker Sally Aitken’s terrific documentary Playing With Sharks, about the woman who did just that, and so much more.