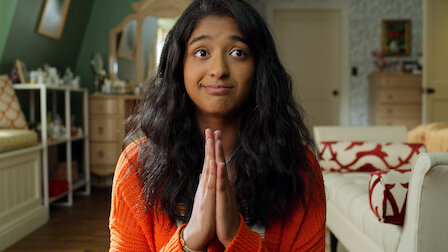 The very first words uttered in Never Have I Ever on Netflix are: ‘Hey Gods, it’s Devi Vishwakumar.’

This opening scene drew me in like a moth to a flame, as a Tamil diaspora Hindu immigrant.

It was a reflection of my life as a teenager: trying to understand this ancient religion, praying with folded hands to multiple Gods – all avatars of one God – asking for guidance.

This type of representation as a South Asian woman was invaluable to me as it was otherwise non-existent.

When the show – which is based loosely on actress and writer Mindy Kaling’s teenage years – was announced in 2019, to say I was excited was an understatement. And as the first season cultivated so much discourse, I knew there would be a second.

The only other show with a South Asian female main protagonist that lasted multiple seasons was 2012’s The Mindy Project. It made me feel more empowered than ever, seeing a dark-skinned brown woman who lived her life like she was in a Richard Curtis rom-com.

Half Tamil and half Bengali, Mindy Kaling made her name in the American incarnation of The Office. Her lead role in The Mindy Project – a girl-boss doctor who made her own bold choices and encouraged young women to take control of their fertility – spoke to me.Continue reading.