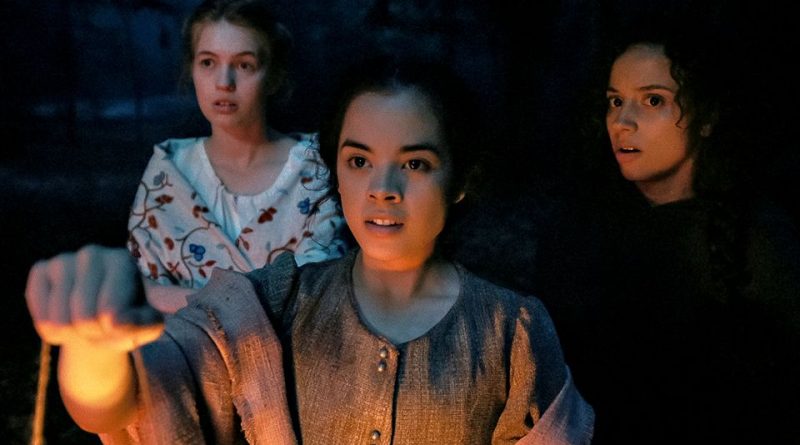 Based on young-adult powerhouse novelist R.L. Stine’s Fear Street books and pitched somewhere between homage and pastiche, the three-segment Fear Street is much ado about nothing, an ostensible tribute to horror movies of the 1970s, ‘80s and ‘90s that amounts to little more than a bunch of shallow shout-outs to movies that helped redefine the conventions of mainstream horror movies.

Rooted in the centuries-old conflict between a pair of adjacent suburban communities–wealthy Sunnyside and working-class Shadyside–Fear Street opens in 1994 and works its way back to 1666, the year that purported witch Sarah Fier was hanged in the town square. The 21st-century kids have heard about their hometown’s grim history, but whatever… they’re far more interested in afterschool jobs and who’s dating whom than a bunch of boring old history crap… except that the boring old history stuff keeps rearing up its ugly head and seems disturbingly relevant to 21st-century rivalries between kids on the opposite sides of town. The Sunnysiders are the golden kids–their parents have money, their schools are state of the art and they float through life on a cloud of privilege. The Shadyside teens are poor or lower middle-class; they’re struggling to balance schoolwork, their parents’ and siblings’ complicated lives and a multigenerational legacy of deprivation. Sunnyside kids are born to rule and Shadysiders are doomed to be shifted aside no matter what they do or how hard they try. Divided into three segments, Fear Street time glides between the 17th and 20th centuries, following the same core group of characters as they play out destinies rooted in a distant past that survives into the present, like the hanging tree that traumatized earlier generations and is now part of a nostalgic display in the local shopping mall.

Based on books by incredibly popular young-adult novelist R.L. Stine, Fear Street was apparently conceived as a rethinking/reworking of 1970s-90s slasher movie tropes: An admirable aim, since those movies redefined horror movie conventions. But the movie version is so consistently on point that it’s a bit dull… though that may be the perspective of someone who saw all the films it references–from Friday the 13th to Scream–when they first played in theaters. Yes, they laid the groundwork for subsequent decades of horror movies, but their innovations are so firmly woven into the fabric of 21st-century horror that they’re hardly worth reworking/parodying.

Veteran composer Marco Beltrami’s soundtrack is exceptional, and the selection of contemporary music cues are consistently on the money–which I say as someone who heard all those songs as they were released. And yet that’s where I have to ask myself again, what’s the point?

The source movies are all out there, so easily available that all you have to do is a quick step to the side to find them. The best–by and large the first in the various Friday, Nightmare, Hellraiser, Evil Dead series–are as nasty as they were when they were new, and if the Fear Street movies are meant to be a primer, I hope they succeed in directing younger viewers to the originals. Though my definition of success for pastiches/reworkings is that they lead viewers to the original films, gritty slices of ‘what, you think you’re not afraid of the dark?’ ass kicking, I still find myself wondering about the point.