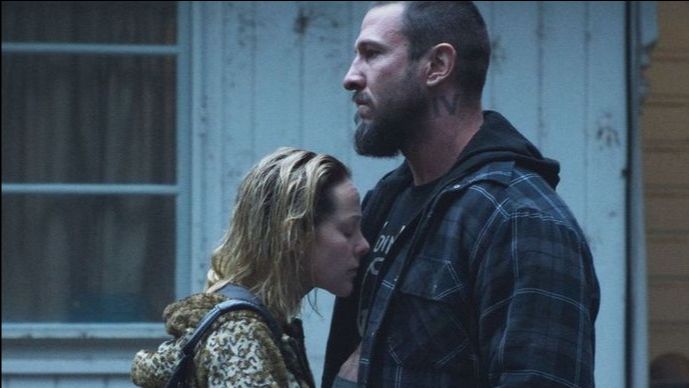 Regrets and yearnings for second chances haunt the hardscrabble lovers of Lorelei, a character study with natural performances that rise above its sometimes sluggish pace.

After serving fifteen years for armed robbery, Wayland (Pablo Schreiber, Orange Is the New Black, American Gods) walks out of prison into the open arms of his biker gang and into a halfway house at a local church. He doesn’t expect to see his high school sweetheart there, in a support group for single moms.

As teens, he and Dolores (Jena Malone, Antebellum, Nocturnal Animals) used to talk about stealing away from their Oregon hometown to Sunset Boulevard to watch the sunrise and start a new life. Wayland’s arrest derailed those plans but not their feelings for each other. Yet even as they rekindle their romance, thinking of what could have been threatens to break them apart.

Writer-director Sabrina Doyle, making her feature debut, infuses Lorelei with emotional details and affection for these characters that gives the film a lived-in feel, even with dream sequences about the lure and dangers of the sea.

In German legend, Lorelei is a beautiful maiden who drowned herself over an unfaithful love, then transformed into a siren to entice fishermen to their deaths. While the film doesn’t overtly mention this legend, Doyle uses lots of blue hues and watery references as metaphors both for rebirth and drowning in responsibilities and circumstances.

Dolores, who quit the school swim team when she first became pregnant, has dreams where the ocean calls to her. She named her three children after different shades of blue: Dodger (Chancellor Perry), Periwinkle (Amelia Borgerding), and Denim (Parker Pascoe-Sheppard). As on-the-nose as that is, the young actors, all newcomers, turn in fine performances, and the script is refreshingly matter-of-fact about Dodger being of mixed race and Denim being gender-nonconforming.

Schreiber and Malone, both of whom also produced the film, have several effective moments together, such as when they go out for drinks to catch up. There’s still an attraction between them, and when she hugs him with joy, the looks on their faces show how much they’ve missed each other and how it hurts to think of the time they’ve lost.

Doyle worked with producers Kevin Chinoy and Francesca Silvestri, who also produced 2017’s The Florida Project, and Lorelei at times feels similar to that film (and 2010’s Winter’s Bone) in humanizing characters barely scraping by. But unlike 1997’s The Boxer, another romantic drama about working-class lovers reunited after a prison stint, Lorelei shifts from a two-hander into focusing on Wayland’s growth.

Dolores quickly asks Wayland to join her chaotic household, where he becomes a reluctant but needed father figure. Dolores is happy about that yet jealous, the type of mom who asks her kids to call her “Lola,” then sulks when Wayland figures out how to make Peri smile.

As Wayland struggles with employment and domesticity, the plot spins its wheels, although the supporting cast, particularly Trish Egan (The Maestro) as a salty and compassionate pastor, enlivens things a bit. The biker life beckons to him just like the ocean and Los Angeles taunt Dolores, but giving her mysterious, if not questionable, motives results in a murky third act. Underwater in a swimming pool or weeping at work, Malone channels Dolores’s pathos, but Lorelei seems more interested in Wayland than this mom who’s struggling too.