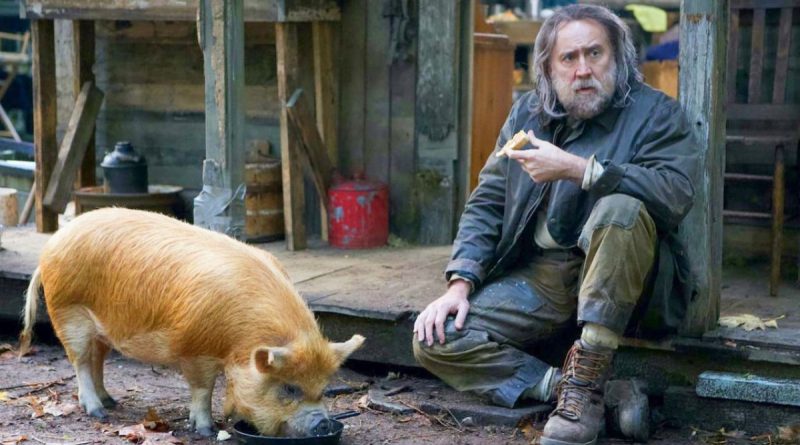 Writer/director Michael Sarnoski’s feature Pig is a meditative, cinematic poem on loneliness, love, and loss. It unfolds through a powerful blend of hallucinatory, surrealistic scenes juxtaposed with realistic, unnerving confrontations. Expressionistic lighting and emotionally evocative sound add to the impact of a presentation teeming with food and nature metaphors, all enhanced by minimal, yet consequential dialogue.

Pig’s streamlined story quickly establishes the relationship between Robin, called Rob, Feld and his beloved, truffle-hunting pig, his sole companion. Rob became famous as a celebrated chef but left Portland fifteen years earlier for a hermetic life in the Oregonian forest. These details emerge piecemeal after the violent kidnapping of his pig sends Rob on a single-minded search for her back into Portland.

There he enters a bifurcated world: a subterranean realm where restaurant workers endure brutal beatings and, later, an upscale restaurant called Eurydice, Orpheus’ love in Greek myth whom he wanted to reclaim from death. Here in this pretentious, sterile dining atmosphere, Rob most directly and, as always, succinctly expresses his apocalyptic disenchantment, saying, “Every day you wake up and there is less of you.” Earlier a kingpin named Edgar tells Rob, “You have no value. You don’t even exist any more,” a fate Rob seems to desire.

In press notes, Sarnoski describes the catalyst for Pig’s screenplay as the effect of his father’s death, and family loss matters here, though elusive in details. Sarnoski writes that “people integrate grief into their world in different ways, and it shapes how they see themselves and the people around them,” including long-term. He presents this philosophical observation with a clarity realized by Nicholas Cage’s transcendent performance of lumbering physical movement and prophetic, painfully articulated speech, as with a man not accustomed to conversation. Equally impressive, Alex Wolff plays Amir, who collects Rob’s truffles each Thursday and provides his ride in Portland. In a small role, Adam Arkin offers a convincing foil. Solid, thought provoking, and insightful, Pig is Michael Sarnoski’s formidable film debut.