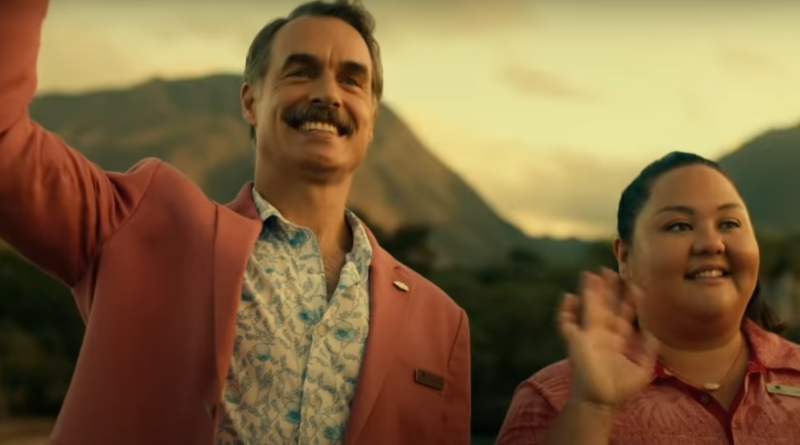 As the plot of Mike White’s new HBO series unfolds, it’s as if Fantasy Island merged with The Love Boat.

In the opening shot, a casket is being loaded onto a plane. It’s a mysteriously ominous beginning that soon shifts to a tropical island where smiling Armond (Murray Bartlett), the smarmy resort manager, and his newly hired assistant Lani (Jolene Purdy) prepare to welcome new guests as they arrive at the luxurious White Lotus Hotel.

Predictably, there are newlyweds: enormously wealthy, entitled Shane (Jake Lacy) and his bride Rachel (Alexandra Daddario), who were promised the Pineapple Suite but now have to settle for a second-best but still-magnificent, ocean-front accommodation.

Last but certainly not least is needy, self-centered Tanya McQuoid (Jennifer Coolidge), who plans to scatter her mother’s ashes at sea. Complaining of an aching back, Tanya immediately befriends Belinda (Natasha Rothwell), the spa manager, ignoring the guest/staff boundary by inviting Belinda to join her for dinner and then promising to provide financial backing for Belinda’s own wellness center.

Petty privilege and quirky dysfunction prevail but, unfortunately, the stereotypically splashy characterizations are shallow and superficial. Which is surprising since Mike White’s Enlightened – also on HBO – was quite the opposite. Watching White skewer the guests’ toxic behavior is a mixed-bag of economic and gender inequality.

“Nobody cedes their privilege,” Mark astutely observes. “It goes against human nature. We’re all just trying to win the game of life.”

Filmed at the Hawaii’s Four Seasons Resort Maui at Wailea, the production cast and crew were sequestered during the pandemic – and, presumably, duly pampered.

On the Granger Gauge of 1 to 10, The White Lotus is a snarky, satirical 6, streaming on Sunday nights in six hour-long episodes on HBO/HBO Max.