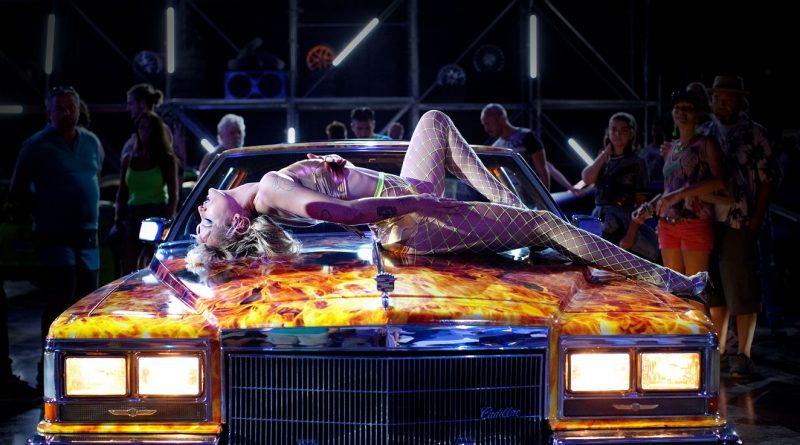 Julia Ducournau has created a powerful iconic film, Titane, the Palm d’Or winner of the 74th Cannes Film Festival, where the human body is taken for a ride within realms of ambiguity. It stands out among the films in this year’s feature film competition because of its cinematic gestalt of a cyborgian split in gender expression.

There were four women on the feature film jury this year. Even if 20 of the 24 films in the official competition were made by men, how women see film and make film is clearly different than men. A jury of primarily women notices this. The world of film critics is overwhelmingly composed of men. Many of the roster grids at Cannes were composed of men, reflecting a gender biased assessment of the films during the festival — which differed from the awards.

Julia Ducournau’s cinematic style is accomplished. The cadence of shot, sound and montage conveys a skilled technique and craftmanship in the representation of gender. There is a refreshing lack of incessant dialogue in the screenplay by Ducournau. This is a film that shows, not tells. Ducournau “shows” how women feel. She shows their bodies in intimate detail and their emotions in facial expressions and corporeal reactions. They are above all “doers”. She shows their empowerment, and their vulnerability and strengths even as they are assaulted and bullied.

Ducournau knows how to visualize female characters, not through surface reality, window dressing or mirrors of the male gaze of the camera but how women feel interiorly. This is accomplished by how the characters gaze at each other. The scenes are visceral and cathartic. She shows physical metamorphoses and transformations of female characters through ingestion, digestion, and sexual experience in her work. In Junior (2011) – Petit Rail d’Or (Cannes Small Golden Rail award) she presents a girl bullied as she goes through adolescence and in Raw (Grave, 2016 Cannes FIPRESCI award) how a young woman at vet school is forced to ingest animal meat and later becomes a cannibal. Garance Marillier plays a vegetarian pre-vet student, who resurfaces in a minor but important role in Titane. In Raw, Ducournau’s proclamation that cannibalism is human defies labeling her work as simply horror. Likewise, Titane is not “monstrous” horror but about what separates human from machine.

Titane begins with a car crash. A narcissistic uncaring father (Bertrand Bonello) screams at his seven-year-old daughter Alexia (Adèle Guigue) in the back seat to be quiet and seconds later the car hits a barricade which sends her, not him, to the emergency room. As she sits up in bed, her head is covered with a vise made of biocompatible, fire-resistant titanium (titane, in French) to keep her head erect. She receives a titane implant sutured into her head wound. When she leaves the hospital after rehabilitation, there are closeups of a scar that looks like brain tissue. It is a blaring remnant and hair cannot cover it.

The opening scenes of Titane show female erotic dancers acting out male fantasies by performing on top of shiny powerful cars with lots of horsepower to showcase the vehicles. The men desire them and wait outside afterwards for them but after the show is over, Alexia (Agathe Rousselle) turns off her act. One admirer follows her asking for an autograph, then a kiss, and in response, she plummets him in the head with a kanzashi- a Japanese hair pin used by Samurai. Leaning over the window to her car, his mouth exudes white foam that splatters on her in his last breaths. Later that night there is a loud pounding at her door. Alexia opens it and is led to a garage where a sedan with a running engine is waiting for her, entraps her with seatbelts and sexually assaults her. From the forced kiss, Alexia has entered the interior world of a car that has become “humanized” through rape and revenge. She is pregnant despite the medical examination conducted by her father, a physician.

In the exhibition dressing room Alexia is drawn to Justine (Garance Marillier) and follows her home. Unlike the exhibition kiss, in a failed sexual encounter of mutual consent, Alexia attacks Justine with her kanzashi and kills her. She goes after Justine’s housemates except a transgender she embraces. The experience in her garage has set her on an instinctive and compulsive journey leading to her father’s home that she ignites in flames.

Following these incidents, Alexia’s appearance is described to the police and is broadcast on news and public monitors. Her image becomes connected to pictures of missing children. To conceal her identity, she shaves her head and binds her chest at a service station restroom. Alexia becomes Adrien. (These names are also used for the main characters in Raw.) One of the missing children is the son of the fire marshal of the fire brigade (sapeurs-pompiers) Vincent Legrand (Vincent Lindon). When Adrien turns herself in at the police station, her likeness matches that of Vincent’s son who is ecstatic to be reunited with him. Like Adrien, Vincent conceals himself using steroids to stay fit for work with his crew of young men who revere him. His seemingly unconditional albeit blind love touches Adrien.

Central to both of Ducourneau’s films are rituals involving contests of feats displaying macho prowess. In Raw, initiation rites are given for the induction of new students into vet school such as the ingestion of animal parts followed by a stiff drink. For the firemen the extinguishment of fires is followed by a tribal dance of jubilance. Images of smoke and flames are strikingly shot at dusk. The choreography of male bodies shot in slow motion to loud pulsating music is an important element of the overall kinetics of the film. Vincent dances to “The Zombies” hit She’s Not There after being reunited with “Adrien” who is made a fireman and assigned light duties. Her slight thin body, demeanor and gait is tauntingly perceived by the fire crew as “gay”, yet they have her perform for pleasure in the tribal dances. “Adrien” becomes “Alexia” from the exhibition halls in a masquerade not unlike Marlene Dietrich as Amy Jolly in Morocco (1930) but how she arouses the male spectators is problematic.

Adrien’s mother (Myriem Akheddiou) knows that he is not her son and sees him unclothed as eventually does Vincent revealing a pregnant female body. Black engine fluid exudes from her abdomen and she tries to abort the fetus. Eventually Vincent must come to terms with the body of his “son”, which is the body of his “daughter”.

The power of the film is how the binary male worlds of auto shows and firefighting are infiltrated by a woman, both human and machine, who encroaches upon the patriarchal order and puts into question the playing fields of their sacrosanct sports.